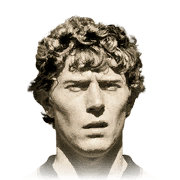 I don't normally write any reviews, but I saw this man does not have any yet, so I felt compelled to share with you all just how great this guy is for me! I was playing before with Neymar up front next to baby Zola, but I had some spare coins and decided to try prima Butra. Not a single moment of regret since.

I am not a great player by any means (currently DIV 4, but on the rise thanks to him), but he changed everything for me. His dribbling is so smooth, even without using any skill moves he can easily destroy the best defenders. His positioning is incredible too, he is always in the right spot to finish the attack. Most surprisingly for me though, is the amount of assists he gives. He makes my entire team play better. Baby Zola was already doing great for me, but has now basically doubled his goals per game thanks to Butra. He either gives the right pass for Zola to finish, or he draws in the defenders to create so much space for my other players.

Absolute game changer for me!

At first, I am a regular gold 1 player and after trying Eto'o, Cantona as my Striker, I wanted to go with something different and off the radar. So I decided for Butragueno even though I was quite unsure, since 3* Skills usually is no option for a player of my front four. But I still gave it a go, and I wouldn't regret it. I played him in a 4-4-2 as a striker together with Mbappe with a( have a look at my squad) and he was phenomenal. He is incredibly small, feeling smaller than any player I ever tried before, but at the same time he is unbelievably fast. His 4* Skills really bothered me at the beginning. But as I progressed with Butra, I adapted a more efficient, no-nonsense playstyle, with less skill moves, which made him even deadlier. I can only say, that he scored 180 GOALS in 101 games, while assisting over 70 and I am not even talking about all the penalties I earned through him because he is so incredibly agile.

so, this card... As a player who uses skill moves when he was one of my picks in my icon player pick I wasn't sure about him but picking him over (mid) del Pierro and (mid) best was the best decision I could have made. This card is the definition of a rat, he is so short and agile and he feels elite, when he bridges he runs around the player against him for fun, he is just so small and fast. Anyway, the first game I played a hawk on him and I didn't like that his dribbling didn't feel as responsive as possible, so I switched to finisher and it was such a good decision, playing butra on either a finisher or engine is key because he only has 3* skills you need the absolute most responsive card you can get. (engine if you want passing and pace, finisher for shooting) In-game this card feels like the fastest player I have used, easily his pace is horrible to deal with if playing against him. His shooting is very trustworthy he will bang whatever you want into the back of the net, finesse shots, power shots, across goal, near post. He is a finishing merchant with one of the best finishes in the game, it's comparable to Puskas's left foot. His passing in-game

is spot on and while there isn't any stat indicating that you should trust his passing you should, but his long passing isn't the best. His dribbling surprised me and not in a good way, I expected a 5'6 player to dribble beautifully silky but he didn't without the chem style, keep in mind my dribbling standards are very high for any normal player his normal left stick should be more than good enough, but with a finisher/engine he has the best dribbling in the game along with Puskas. Lastly is his physicals and those are weird, this is because if it comes down to a contact situation butra will lose but his recovery is insane because he is as small as he is he can run around varane or boateng and jam the ball out of their feet. Something else I noticed with the card which i loved was that his height allowed him to dispossess centreback's because his little feet fit comfortably under the CB's legs <----- Very underrated trait...

One of the fastest players in ultimate team

One of the jammiest players in ultimate team

One of the best finishers in ultimate team

Weak on the ball (His jam makes up for that)

His Med/Low work rates, not noticeable in game but it's still there.

Other than that all good.