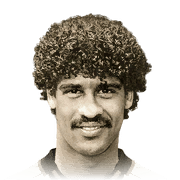 In the linked squad, I change the formation in-game to a 4-3-3 (2) formation with Rijkaard as the CDM. I originally had the 83 Benjamin Andre in that position, who was amazing for me, but as soon as I saw Rijkaard was available for icon swaps, I had to get him into the team.

Please note that I'm not a great player (Div 4 rivals, generally Gold 3 in Weekend League) and thus will probably mostly face much weaker opponents than most of you, so please bare that in mind.

I've now used Rijkaard in 12 games, all in Division 4 rivals. He's scored 2 goals and has 6 assists. I've used a shadow chem style on him.

The main concern I had before getting Rijkaard was how low his agility (72) and balance (54) were, especially compared to Andre, who has 86 in both. However, so far this hasn't really been an issue for me, especially defensively. When I've needed to change direction as the opponent passes the ball in a different direction, he's turned very smoothly. Of course it would be different when on the ball, but I don't really have much interest in dribbling with my CDM much anyway.

His M/M workrates were also a bit of a concern, but since using him, I've found that his movements on the pitch are not at all what I expected. I have him with the drop back between defenders tactic, and when I have possession on the halfway line, he drops even deeper than the back-line, almost like a Libero. However, when I'm passing the ball around in the opposition half, whilst he'll mostly stay back, he does quite often make these random runs forward (without me triggering the run). In every case so far, these runs have actually helped me a lot, and I have not yet been annoyed about the AI on him seems to know when to make the runs forward. One time, he ran all the way through the opposition backline, and after playing him in, he calmly finessed it into the far corner; I was very impressed with that.

When I was using Andre, I felt he was winning every tackle and intercepting every pass so well. However, Rijkaard has now taken things to a whole new level. His 78 aggression has not been even slightly noticeable, and he so easily and casually bullies the opposition off the ball. I would actually say he's better than Andre defensively.

Rijkaard's passing is phenomenal. I was initially considering using a powerhouse chem on him, but now I know it is not worthwhile at all. I feel his vision is higher than 85, because his passes through to the forward line, or behind the opposition backline, are just so clever. He plays the pass that I can't see, and it often works out so very well. He has 6 assists for me in 12 games, but if I were better at finishing, he'd probably be closer to 15 assists. I used to only occasionally play long passes with my CDM, but after a couple games using RIjkaard, I'm now spamming long balls to Mane and Alessandrini on the wings. He pings the passes so well and they're always bang on point.

His pace, with the shadow chem style, is pretty good and I have no problems with it....except for one. When I win the ball back with my defenders, one of my moves is to play a through ball, past the opposition forward line, to the CDM so he can run forward and play the pass. I understand that sometimes the defender slightly overhits the pass and it can run too far past the CDM and to the opposition. However, this has happened A LOT with Rijkaard since I started using him, and it is so annoying. The pass to him doesn't even seem that bad, but he seems to take an absolute age to get to the ball, and quite often just doesn't get to it in time at all. I wonder if it's to do with the agility/balance, that he has to turn to run onto the ball and it's the turn before the run that slows him down. Either way, this is quite a weakness.

Whilst he doesn't get the chance to head the ball much from open play (online players don't often take long goal kicks that my CDM can get to), his heading ability does show in either box for corners. At both ends, he seems to win so many headers from corners. Attacking-wise, he's had a number of headers go over or wide, but he is definitely a threat, as he is winning so many. He has scored a header for me from corners. This is a definite plus if I can get a few goals out of him this way.

All in all, as much as I will miss using Benjamin Andre, grinding 14 tokens to get Rijkaard to replace him seems totally worth it, and whilst I was tempted to instead get an icon pack instead, I have no regrets about getting Rijkaard. Receiving a through ball from defence is a big issue, but otherwise he seems like the perfect fit for my team, so taking into account the fact I didn't have to spend coins on him, but also taking into account the grind I had to do instead, I'd say this is an 8/10 card for me. I want to give it a higher mark, but after using Petit last FIFA, Rijkaard isn't quite as good. Rijkaard fits my team perfectly, but he's not special, and I don't feel my team has improved that significantly now that I have him in it, but it has improved a little bit.

So when I first saw this card come out for Icon swaps I knew I had to do him. I'm a div 5 player about to be div 4, and Rijkaard has helped to change the entire dynamic of how I play. I play him as a CM in the 4-4-2 with Capa. I use a shadow on him to help boost his pace, and he is insane. When I first got him I was a little unsure of how good he was going to be, but after about 3 matches I started to get used to how he plays. With a shadow on him he is able to get up and down the pitch and act like Box to Box midfielder, and 99% of the time he is bodying people's ST and CAM's like they are non-existent. his vision is one of kind, and it seem like he is finding passes to open players that I never even saw. even though he has 72 agility and 54 balance don't let that discourage you from using him, because in-game they feel a lot higher. in custom tactics I have him on stay back while attacking, in which case it is very nice because If I move one of defenders up to try and get the ball he automatically backtracks into whatever defensive position I just left open, which really helps if I screw something up.

Better agility and Balance than what the stats say