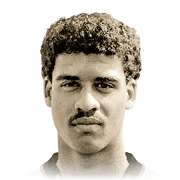 For this weekend league, I was able to afford mid-Frank Rijkaard using him left center back and right center back being Denayer rulebreakers in a 4-2-3-1, and on the face stats he looked brilliant and he felt relatively smooth on the ball and never really threw possession away so you could really see his composure and reactions come into play and was able to get me out of the most pressurized situation. For my playstyle, I like defenders who are comfortable on the ball and are not a liability when they have it so his passing was something I was really impressed with, and that 4-star weak foot made him be able to fiz a ball on ethier foot, He gave some really good passes into my midfield so I could progress forward. now most importantly his defending, obviously cutting passing lanes and shielding the ball as well as 1 on 1s he did exceptionally well and as he should but I could tell sometimes since his aggression was so low he wouldn't always tackle into the ball compared to someone like Kante he would sometimes do a sort of weak tackle leading to the ball not always be won. his body type was something that also stood out and is something that is very underrated for defenders so since he has a high average body type compared to the best one (in my opinion) lean sometimes when he shrugs people off the ball they still retain possession whitch can be a combined of low aggression and body type. As for corners being 6'2, I would think he would score many headers but he did not score a single header and he was even set at that front post he was just getting bullied on corners.

the pace can keep up with most attackers

I've had him since November and he is a club legend. Although he has 73 agility he never fails to turn to the player and make the tackle. I recommend using a shadow on him.

feels weak on the ball

Im a div 1 player with 2100+ skill points. I played him left cb in a 4 back and as a central cb in a 5 back. Imo hes too slow even with a shadow on, he gets out paces by gold cr7. His turns are slow and is even worse in delayed gameplay. His jocking speed feels very similar to a vvd which is slow and clunky. He can put a strong tackle in tho and wins the ball back every time when you slide or stand tackle, his strength and height helps him with it so there wont be bs where you tackle the player and it bounces straight back to the opposition. His passing range is exceptional as a cb, very nice lofted through balls to the overlapping wing backs and his driven passes are pin point accurate with both feet. His one goal came from a corner, the ball was bouncing around the box and he half volleyed it with his left foot into the top bins.

Id say hes very similar to a van dijk with the slow turns but strong tackles. He feels a bit faster than van dijk and has a better passing range than him. Van dijk beats him in the air tho.

Overall, Id say hes not really worth the coins, I just have him for the links. I think joe gomez is a better cb just becuase of the pace as its so important this year.