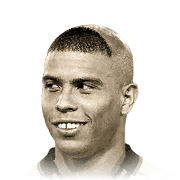 cause there are pretty strange reviews about R9 so far i have to write my honest opinion about him...

He‘s my left striker in a two striker formation and he‘s just another level! I‘m in Div. 1 and Gold 1 in FUT Champz.

He is very fast and is able to outpace players like Varane oder Joe Gomez.

His dribbling is great for his Body Type, but he’s no Cruyff oder Neymar. 5* skills makes it even better.

His physicality is just phenomenal. He is so strong. Can easily push off defenders. His stamina is enough.

Passing is ok for a striker and defending is not necessary.

I think R9 is the best striker in Fifa 21. I played CR7, Mbappe, Neymar, Eusebio, ... but Ronaldo Nazario is another level! Even if he is the best Player in the Game i don‘t think he‘s worth 9 Million coins - no player is worth this crazy amount of coins. Nevertheless I personally enjoy playing him and wont sell him soon...

Every opponent sweats for his life:‘D

I think you already know that I sold my house to get him. He is simply a god. Partnered with red Ronaldo ( I finish elite not gold lol) is unstoppable.

Every shot is a goal. I played against an elite 1 player in fut champs and managed to win 3-2. I did only 3 chances and the opponent more than 10 ( I feel kinda bad ngl). Ronaldo is just a cheat code. It makes the games actually enjoyable ( for me not for the opponent).

So i did the Mid or Prime Icon Pack and Fortunately Got him and im still Gassed, I play him with an engine up front with mbappe and he is the BEST Scorer i have ever used! I packed him back in FIFA 18 and sold him and now i can keep him for the rest of the game. for me he has currently played 6 and scored 15 with 5 assists in rivals div 3 and if u get him in a pack or can afford him GET HIM!!!!

Stamina but is fine for me