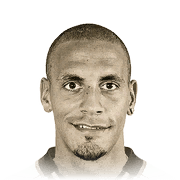 So i got him from my swaps pack. I was very hyped up. He went straight into my team. And oh boy is he good.

Now, let me get to the ratings:

Very quick defender. Catches up to most attackers. Solid 8.

But why? Why would you shoot with him?

Good enough dribbling for a defender. 5.

Boy, oh boy... What do I even write here? He is basically a better Varane. Period.

Very good defender. Quick, but not the quickest. Defends like crazy. Bodies most attackers. Passing does the job. Solid 9.

Before i start writing my review in the squad link is my team in game.

So Rio is a brick wall. He is so good i dont know how to describe it, He wins that ball so much. All seriousness rio is one of the best cbs in the game and he is under a mil. I think in the 12 games ive played with him so far he has been dribbled round maybe two or three times. I replaced varane (rttf) with Ferdinand and rio is a lot better than varane even though varane is "meta". If you want a game changing CB y you should get this guy if you can afford him.

Shooting - N/A ( he scored a couple of corner headers though)

Dribbling is the only con for me as he cant dribble that well but for a CB? It will do.