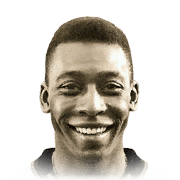 Before I start this is my first review on futbin so hopefully you enjoy!

So lets set the scene. My friend has just packed mid Eusebio from the Mid/Prime icon sbc, and this has fuelled my desire to do one myself. I have done a lot of them this year, with the results being Baby cantona, Baby Essien and Mid Petit. I finally finish building it and shareplay my screen to a friend. I press x, and hope for the best. I see Brazilian, CF and my heart sinks as all I think is Rivaldo, because it could never be Pele right? WRONG! THE GOAT WALKS OUT!

I slot him into the striker position, and go straight into Div Rivals (Div 2 player, Elite 3 champs) to try him, only for matchmaking to be disabled :(

I wait and wait so I can finally get into a game, and then miraculously the servers come back from the dead, and I can try out Pele

PACE- Lightning fast, Mbappe level so I have to give a 10/10

SHOOTING- It's truly beautiful. He's one that can score from the most ridiculous angles. He has the finesse shot trait and you can really tell in-game, it's amazing. He gets a lot of curl on it and I'd say long shots from scoreable angles go in around 80 percent of the time. The 4* WF honestly feels like a 5*, so don't let that be a limiting factor when picking him. I will give him a 9.8/10 for shooting purely because the only way he could improve would be through getting the 5* WF

PASSING- It's really good for a st, and if you play in a 2 st formation it will really really benefit you. Obviously TOTY KDB and Bruno will be better though so I'll give it a 9/10

DRIBBLING- This is probably what separates him from most strikers, he feels like Neymar on the ball, and he has the sticky in-game where you can't get the ball off of him, definitely a 10/10

DEFENDING- Ok this bit isn't going to be on defending because it's useless, instead I'll talk about his heading accuracy, and I can say that it's really really good. If you aim the ball properly with the manual heading, most often than not it goes in, so for his heading I'll give a 8.5/10

PHYSICAL- Decent, don't expect wonders. The guy has really really good jumping, so he can be a threat from corners, but obviously in a strength battle against VVD or Varane he probably won't win, but don't write him off. He's not weak and I've seen numerous times him getting jam and rebounds even if he initially gets dispossesed. He won't get bodied to the floor either, with the high balance. His stamina is also great and will last for the whole game and also Extra time, so I'd give his physicals like a borderline 8/10

OVERALL- This guy is astounding, and is the epitome of the meta ST on Fifa. If I had to compare him to a player on this game, it'd be Neymar, on steroids. Pele is definitely top 2 Icon attackers in the game, with R9 being the other one. If you're trying to pick between them, you realise it's similar to the Mbappe vs CR7 debate. If you want an out and out ST you go for R9. However if you want a versatile attacker who can play any attacking position, you go for Pele. This is in no way me saying Pele isn't as good at ST, because that would be extremely false. He's amazing there, and if you want to buy him I would highly highly highly recommend him, and if you pack him, you now have one of the best ST in the game untradeable who's going to last you until the end of the game.

A long time ago in a country far away, a prince was born. Considered "the chosen one", he neglected this responsibility and left home. Traveling with only 3 things: a ball, a pump and a Yeti water bottle, the maestro of magic would abolish defenders careers with one move. Years later, having won all he cared to win, the king of fúbol declared he would hang up his boots to spend time with friends and family back home.

A middle aged white boy from the suburbs of DC enters a Louis Vuitton store. He looks at the price of a checkered belt running $700, and in this instance, decides to buy Pele in Fifa Ultimate Team instead. Scootering home, he stops by the local pub to argue with the bartender about how Pele's four star weak foot is irrelevant, having four base stats in the 90's with a five star weak foot to mesmerize opponents world wide.

A legend is born! Only playing squad battles on amateur, the King scores at will. Ripping apart 65 rated defenders with five star skill moves, and finishing on centerbacks playing goalkeeper with finesse shot trait.