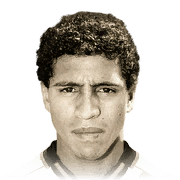 So after picking up Neymar (in my opinion best gold card in the game) I was not sure on how to play Neymar on 10 chem, as I'm a firm believer on trying to play as much as possible players on full chemistry.

I came along this guy and man, I'm happy I did because what occurred is something I couldn't have imagined!

I used before Roberto Carlos mendy on the LB position who was really good but it has to be said, Carlos does EVERYTHING better.

The way he feels when defending, the way he makes interceptions and the way he runs is unreal!

I play him balanced at the beginning of the game, this because he is a absolute beast to involve in your attacks from time to time.

When I feel the game is quite difficult I would put him sometimes on stay back while attacking and it speaks for it self that he is really helpfull at the backline, he stands next to ramos & varane and at times when Ramos tends to be slower he could come in and clean if needed.

Personally the guy is bargain and I wouldn't want anybody else anymore in his place, so guys have a bit of faith and just pick up this legend!

When attacking a lot with him his stamina could be a issue as he gets tired then arround the 70th min.