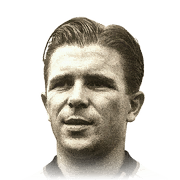 I had no players I really wanted anymore, except for those of 6+ million. After I considered the pros and cons I decided to not save money anymore and just spend it on the prime icon sbc. So after about 12 packs I finally packed someone with a >1 million value. I decided after that to just run with a full icon squad since.

In my team I have prime Butra, prime Torres, Baby Pele and prime Puskas, with Puskas being the eyecatcher at first.

I am using Puskas with Torres up with Butra as a LAM front and after 60 minutes I sub on prime Beckham and put Butra in front. And in good gameplay Puskas is amazing, he is smooth and his left stick dribbling makes it easy to get his left cannon free and take the shot which pretty much is a goal all the time. He is my topscorer in good gameplay, averaging 2 goals each game.

His runs are great, however I notice that even with the Engine chem style he is no match for the Kleibers and Mbabu's pace, so I've taken away the get in behind instruction as that is, unlike Butra, not where he shines.

However, in bad gameplay, so WL during the day, he is hard to play with. He becomes a little bit to dependent on his left foot which is hard to get free as the responsiveness makes it hard to dribble free, this is where Butra's 5* WF makes an important difference. Baby Pele has something magical which makes him also good in bad gameplay, but I don't get Puskas to work in these conditions.

His left is amazing and if you get the shot he will make it.

His stamina is amazing for a striker, he will last the whole game without heavy triggers(on ps5)

His left stick dribbling is smooth and quick

3* WF is hard to use in bad gameplay

Does not come in clutch, won't win hard games for you.

I was lucky enough to pack this beast out of my ultimate guaranteed pack and oh my, he is a beast, every shot you take feels like it could result in a goal, he is by a mile the most responsive player (in my opinion) on the game, he breezes past players like a fut 19 la croqueta spammer and is just amazing at almost everything, to be honest, if I was to change 1 thing about him though it would have to be the strength, he goes down without much force (not unlike real life) and overall feels about as strong as Barca fans love of divock origi, apart from that and obviously his price I would personally consider him to be the best player in FIFA