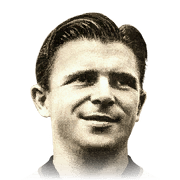 Holy fuck, i'll admit I am biased because i'm Hungarian. So I wanted this card. But this man's finesse shot is goldy. HIs weakfoot is unnoticable, and his shot power. Oh my god his shot power. The man is a cannon. His agility and balance is great he turns like butter. I have loved every moment of this card. Great passing. .I have bought him for 2,076,000 coins. he is 100% worth his price.Only used in Champs!

So I was having a mare in my last WL normally I stop at 17 wins and I get there losing 3/4 games. Somehow, this week, I was 13 and 5 and wasn't feeling my team. Then EA released the base icon pack and I had packed enough fodder in the SBC packs that I could do the base icon for about 100k liquid.

I get the SBC done. I pack Puskas. I was a happy man.

I go back into WL I play 4 games and I get 4 easy wins. Puskas gets 12 goals in 4 games and I knew I had to keep going. I play another 3 games and his tally is already counting 16 goals in 7 games. Crazy numbers.

More then the numbers though, what is impressive is how slippery the guy is on the pitch. His close control is pretty incredible despite the shite gameplay. His finesses are ???? and he pretty much finishes anything he's given. I haven't used too many top tier players this year as I'm not playing much draft but this guy is definitely the best player I used so far.

so I was lucky enough to get him in my first baby icon pack and my god, he is insane. He feels as strong on the ball as gullit and as fast as adama. He is the ultimate striker. My friends said that because of his weak foot he wont be very good, but his 3 star weak foot is unnoticeable and he plays as if he has a 5 star. His base stats are insane without a chem style, but with an engine he is a god. Only problems are that he can only play ST as that is where he is best suited, so if you were hoping to play him CAM, you may have to re-think your team. He is also not the tallest ST in the world, so if you cross the ball to him, he wont always be able to beat the defender and score the goal, but he still has good jumping and is a good height for a ST