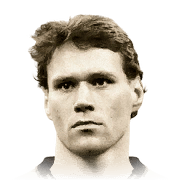 -
Sub out
Upcoming Matches
P. Chemistry
Squad chemistry
ST
90
RW
86
LW
86
CF
88
RF
88
LF
88
CAM
85
CM
78
RM
83
LM
83
CDM
61
CB
55
LB
61
LWB
64
RB
61
RWB
64
Reset
Basic
Sniper
Finisher
Deadeye
Marksman
Hawk
Artist
Architect
Powerhouse
Maestro
Engine
Sentinel
Guardian
Gladiator
Backbone
Anchor
Hunter
Catalyst
Shadow
Comments
Reviews
0
/600
Click here to verify your account in order to comment Update my avatar Dos and don'ts
Top Rated
New
Controversial
Show comments
Top Reviews
Only logged in users can submit a review
A review must be written in English
At least 200 characters are required.
Compare this player to other similar players you have used(optional).
If you import your club to FUTBIN or send us an image with the player data(fill the form below) your review will be marked as verified.
Include what you liked about the player in the pros area and what you disliked about the player in the cons area.
Your review will be manually checked during the next 24 hours.
Chem Style Used
Formations
Position
Rate Player Base Stats (1-10)
Pace
5
Shooting
5
Passing
5
Dribbling
5
Defending
5
Physicality
5
Most Used In:
Submit Review

If nice guys finish last, Marco is the baddest boy in town. This guy can even finish the Sagrada Familia on his own. Left. Right. Headers. Finesse shots. Bursting through my opponents defense. Mid van Basten does it all. He single handedly got me qualified for the Weekend League (5-2 in the end) and scored 36 goals in 17 games (all Rivals and Champions qualification). With 97 attacking positioning, he is ALWAYS in the right spot. With an engine chem style, his dribbling is very decent and he can easily turn away from his opponents. His pace is good enough as I don't think you really need pace this year. If you don't know how to finish this year, you can just shoot with van Basten and it's a goal. Not even kidding.

Hats off for EA for making players like van Basten and Lewandowski actually useable. If you haven't tried the high rated 'clunky' strikers this year, pull the trigger (just like Marco does)! I'm mainly using (ex)-Ajax players this year and I'm having so much fun playing with San Marco.

So Van Basten, i heard he's pretty meta this year and useable. After 21 Games i can confirm that. Van Basten is the best Striker ive played so far. I tried haaland who has a similar body type, haalands turns felt clunky so i was scared that van basten is also slow and clunky. But thats simply not true, he moves smooth, his pace is decent, he can outrun some defenders. Because of his body type he is really good in holding the ball and no defender is able to push him out of the way.

Im honestly in love with him.

Longshots, finesse out of the box are amazing

Positioning, he is always in the right position, good runs and perfect timing.

Finishing, 95 rated in finishing, i think that says everything.

Passing, for me his passing is insane, his stats arent that good but he made some hard assists.

Heading, he wins every header, no matter the defender

Pace, he feels defently not slow but sometimes you feel his pace

3* Skills, its okay tho, hes not here to skill he is here to score

Stamina, he can play 90' mins but its probably better to sub him out in the 70' min

Hi all, this is my first ever futbin review. Realised I need to write a review on van basten because I've seen there aren't many. I packed van basten out of my base or mid icon pack and I felt like I wanted to cry. But then I used him a couple of rivals matches and then I realised how good he is. Now my new favourite ST, tried benzema fekir alessandrini and I rather van basten. His stats are a lie. He is so responsive on the ball and his shooting is disgustingly good. His dribbling is on fire and he definitely doesn't have 70 balance. Sadly his pace let's him down a bit but he still keeps his ground against fast CBs.