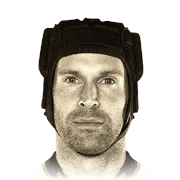 Petr Cech is one of my favourite footballers. Watching him growing up as a Chelsea fan, it was a no brainer for me to complete his card when his Icon SBC came out. I managed to complete his SBC for under 50k coins during the Black Friday promo. Unlike previous Fifa's, high rated Keeper's in Fifa this year perform better than you expect. However, there are moments where all keepers are inconsistent in certain games or situations and thats something you cannot control as a player. I tried him out in Fut Champions, Qualifiers and Division 2 in Rivals and my review is based on around 10 games i used him.

Petr Cech surprised me a lot and he was very consistent in most situations. Corners, Clutch moments inside the box and surprisingly was good against the chip shot due to his height. I tried him on both Basic chemistry style and Glove but i felt Glove overall was better because it boosted his positioning against the long shots. Another interesting part out the card was how he didn't deflect shots often back to the forwards and he would parry it behind for corners. His handling was great and more often than not will always catch the ball. He was very good in 1v1 situations and due to his body type and height would pull off some incredible saves in game.

Here come some of the inconsistencies I dealt with the card. What he wasn't able to save on a consistent basis were the power driven shots into the far post and finesse shots into the top corner (I had issues with the finesse shot even with Donnarumma and Alisson so I believe its a common theme with most keepers). The Glove chem style improved this con a bit but again it was inconsistent. His glaring weakness is that he does not come for crosses often due to his traits and if you are planning to get his card, you should always position him to catch the ball manually in corner situations else he'd be in no man's land with your opponent probably getting a free header towards goal.

Overall, Petr Cech is a top notch Keeper who will perform well for in game. He performs at the level you expect of an icon card but just like with any other keeper, be prepared to deal with inconsistencies. Make sure you use him with 'Comes for Crosses' and 'Sweeper Keeper' instructions in game to cover for his weakness. I wouldn't recommend doing the SBC at full price but if you have fodder lying around and can complete him within the 50-100k mark, he will definitely be good value for the coins spent. If you are a Chelsea fan or an Arsenal fan from his short time at the club or from the Czech Republic, it will be a good card to add to your collection.

It is already a tradition for me to play with icons goalkeepers.

I played with Schmeichel and Van Der Sar, at 20 and 21 fifa

And I must say that I liked Cech much more than these two. He surpasses even the meta Donnarumma

Cech is incredibly good at everything, long shots, shots from 5 meters, even corners (if you tell him to come out for crosses)

I had very tight tackles in this wl, but he got 10 in 3 matches out of 8, which helped me a lot

From cons, he sometimes makes mistakes, but like all goalkeepers

He is also bad at crosses from the game, hesitantly leaves and often misses over his head.

But in general, this is a great goalkeeper and if you, like me, can perform sbc for 80-100 thousand coins, do it.

Cech will close his position for the rest of the game

This Goalkeeper can't grab a ball... all the pozitive review are made when GK's where OP ! now im telling you he isn't OP He has Cautions.. he likes to stay on the line.. even if i set him sweeper keeper of come for crosses it's useless. same with NEW De GEA ! probably Cech is good for people that like to Manual move GK but i do not ! he's AI is awful, trust me who know's me can say that i used all GK in this FIFA 22 but Cech is horrible .. i used him in 489 games, while it was a good patch he still stayed on line, but no no no ! did the sbc and i regret it ! will put him in another better SBC !

Like's to stay on line even with Sweeper Keeper !