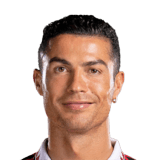 Cristiano Ronaldo's card is rated 90, he is 187cm | 6'2" tall, right-footed Portugal striker (ST) that plays for Manchester Utd in Premier League with High/Low work rates. His average user review rating is 2.2 out of 5 . He has 4-star weak foot and 5-star skill moves, giving him the ability to perform every skill move in the game. He does not have a real face in-game. He has been used in 54,760 games with a GPG (goals per game) of 1.514. The best chemistry style for him is HUNTER. He was born on 05-02-1985 and he is now 37 years old.

Cristiano Ronaldo is maybe in his final form of a useable base card which is sad. Luckily this card is still very good despite the face value stats. If you can get over the balance, he is a great out and out striker. If you are going to try and abuse skill moves with him, he is not the one for you unfortunately. I played him crosses primarily as he is still dominant in the air which he scored 5 headers in 22 matches. 7 Goals were scored from outside the box (3 from power shots, 3 from finesse, 1 from FK). 2 Goals were penalties and the remaining 13 occurred from Ronaldo finding proper space and timing to finish. Never had to sub him off as his Stamina was prime, even had him pressing on possession loss.

Speed when running in behind, first time passes, getting knocked off the ball