First up on our list of predictions (based upon FIFA career mode), we head over to England and the Premier League. While you can find a list of all upgrades and downgrades below, here are a few of the players (who also have special cards) that really stand out.

First up we have the Belgium right winger, Eden Hazard. After a sensational couple of seasons in the Premier League, Hazard really appeared to struggle in 15/16, leaving many people doubting whether he could really be included in the category of world class. Since this he has really started to develop once more, helping Chelsea to win the league last year and almost single handedly winning Chelsea matches this year. With 8 goals, 2 assists and only 3 losses this year while selected, Hazard shows just why he deserves a +1 boost.

It goes without saying that David De Gea is one of the best goalkeepers in the world, and seeing him finally receive a spot in the community based TOTY this year is the least he deserves. From a total of 24 appearances this year, De Gea has accumulated 14 clean sheets and just 3 losses, despite the at times shaky defensive line that sits just above him. For potentially the best goalkeeper in the world, a +1 upgrade feels completely deserved.

Next on the list is the Belgium sensation from Manchester City, Kevin De Bruyne. Since his transfer from Wolfsburg, there has been no doubt around his ability and for anything still on the fence, this season has surely convinced them otherwise. With a total 6 goals, 10 assists and an average of 72 passes per match, a +2 upgrade is more than deserved.

At the ripe old age of 32 and with the lack of people using his card on FUT, it becomes quite easy to forget just how incredible this Spanish CAM actually is. With 5 goals and 8 assists from just 20 games this season, the stats speak for themselves, but when you then consider that Manchester City have won 19/20 games while he was playing and drew the other, you really start to notice just how important he is. A +2 upgrade in this situation would be more than deserved.

Off the back of a record transfer last season, this young French superstar is really showing Manchester United how much he has changed. Sadly, due to injuries, Pogba has played just 14 games so far this season, but with 3 goals, 9 assists and 0 loses, he shows just how important he really is to the side. Hopefully he can continue to stay fit and show everybody just why he deserves a +1 boost.

Tottenham currently sit fifth in the Premier League after a fairly tough season. Certain stars haven't been as prolific as they were last year, but Harry Kane certainly doesn't fall into this category. With a total of 21 goals already this season it quickly becomes very clear just why he received his spot in the TOTY and could be granted a massive +2 ratings boost.

This 25-year-old Egyptian has an incredible season at Roma last year and with a big money move to Liverpool people were skeptical as to just how well he would adapt upon returning to the Premier League. Well, half way through the season it is safe to say that anybody who held any doubts has been well and truly silenced. With 20 goals and 7 assists in the league already, he has more than shown his worth and a +2 upgrade is more than deserved.

After his big money move from Liverpool a few years back, Sterling has never quite been able to live up to the expectations and hype that surrounded him as a youngster. The arrival of a new manager however seems to have completely revitalized the Englishman and from just 22 appearances he has already bagged himself 14 goals and 4 assists this season. Hopefully this form can be maintained going forward, but for now a +2 upgrade is definitely fair. 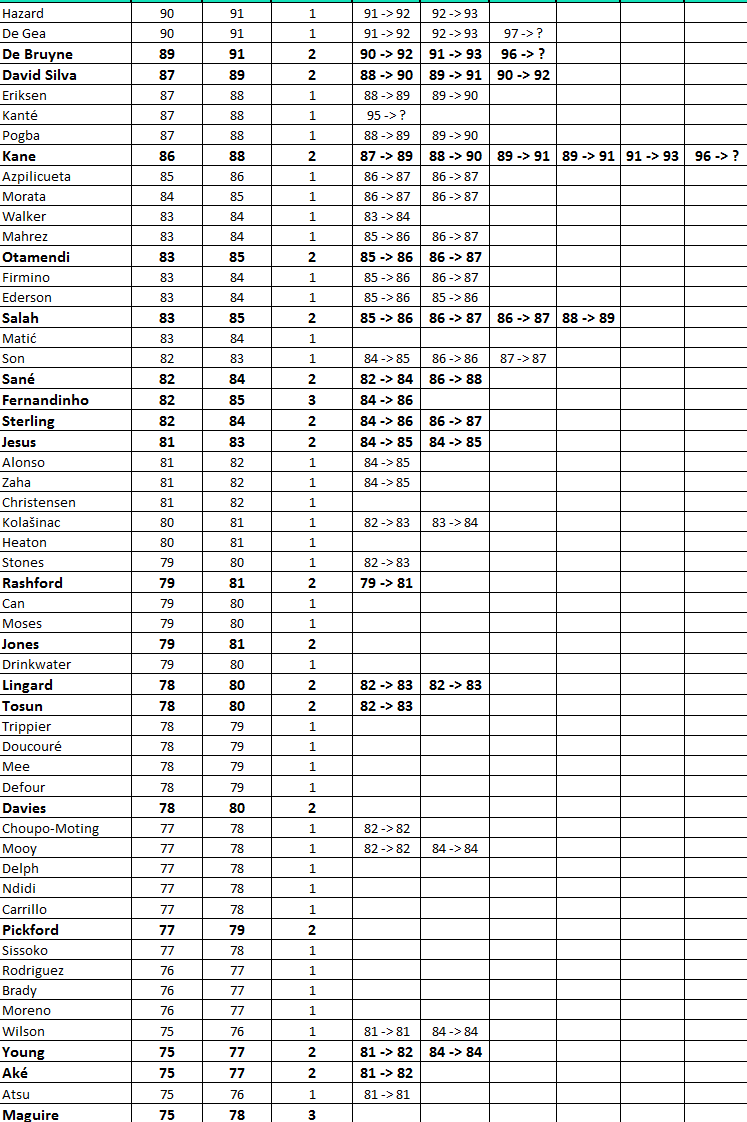 For the second part of today's predictions, we head over to Italy and the Serie A. Again, you can find a complete list of all our prediction upgrades and downgrades below, but these are the guys that really stand out!

First up for the Serie A, we have a young Argentinian superstar who goes by the name of Paulo Dybala. When we look back to his campaign last year, he achieved 11 goals from 31 appearances and the whole world knew just how incredible he was. This year, at the half way point, he already has 14 goals, proving that he is a player that is clearly improving year after year.

The 33-year-old Slovenian goalkeeper proves that age is just a number, improving year after year and showing his worth time after time. Inter Milan have put themselves in a fantastic position to fight for a Champions League spot this year and right at the center of this campaign sits this man. With just 2 losses while playing and 9 clean sheets already this year, Handanovic has saved Inter Milan numerous points, showing just why he deserves this +1 boost.

Last year Napoli really struggled with injuries and Mertens was the man selected to take up the central forward role. People knew he was competent, but what he went on to deliver surprised almost everybody. With 28 goals across the campaign, Napoli finished third, just 5 points behind league winners Juventus. Moving into the 17/18 campaign, Mertens goal scoring numbers may not be quite as impressive with just 11 so far, however Napoli currently sit atop the table, and this man has played a huge part in this.

We move straight onto another Napoli player now, an Italian by the name of Lorenzo insigne. Like we mentioned above, Napoli are simply going from strength to strength and a player with a toolbox the size of Insigne is the sole reason behind this. Whether assisting, scoring or simply giving the oppositions defense nightmares Insigne more than deserves a +2 upgrade.

Mauro Icardi really started to make a name for himself last year. After scoring 24 goals from 34 matches and receiving numerous inform cards on FIFA, people started to remember this young Argentinian strikers name. With 18 goals from just 21 games so far in the 17/18 season, he has not only proved that he is far from a one season wonder, but he has also proved he is one of the most prolific strikers around. A +2 upgrade is more than deserved on this occasion.

The 28-year-old Croatian left midfielder has had some fantastic seasons across his footballing career, but it seems that he is still improving year after year. With 7 goals under his belt already this season he has proven that he can not only influence a match through a supporting role, but can also steal the show and find the back of the net when given the opportunity. Another Inter Milan player and another possible +2 rating just feels right here.

At the start of the season Lazio were likely considered underdogs when it came to pushing for a Champions League spot, especially when you consider the amount of money spent elsewhere. Immobile however clearly had other plans, and with a total 20 goals already from just 19 games, this Italian is on fire right now.  We have seen plenty of +1 boosts, a good amount of +2, but to achieve a +3 upgrade is truly incredible and something Immobile has clearly earnt.

After a massive +3 upgrade on the cards for Immobile, we move onto yet another Lazio player and along with it another potential +3 upgrade as well. Milinkovic-Savic has been an absolute rock so far this season, whether supporting the attack or playing his role in defense, it feels like this man has no limits. With just 4 goals to his name last season, he has almost doubled it at the halfway point this year and to top it off, he shows no signs of slowing down either. 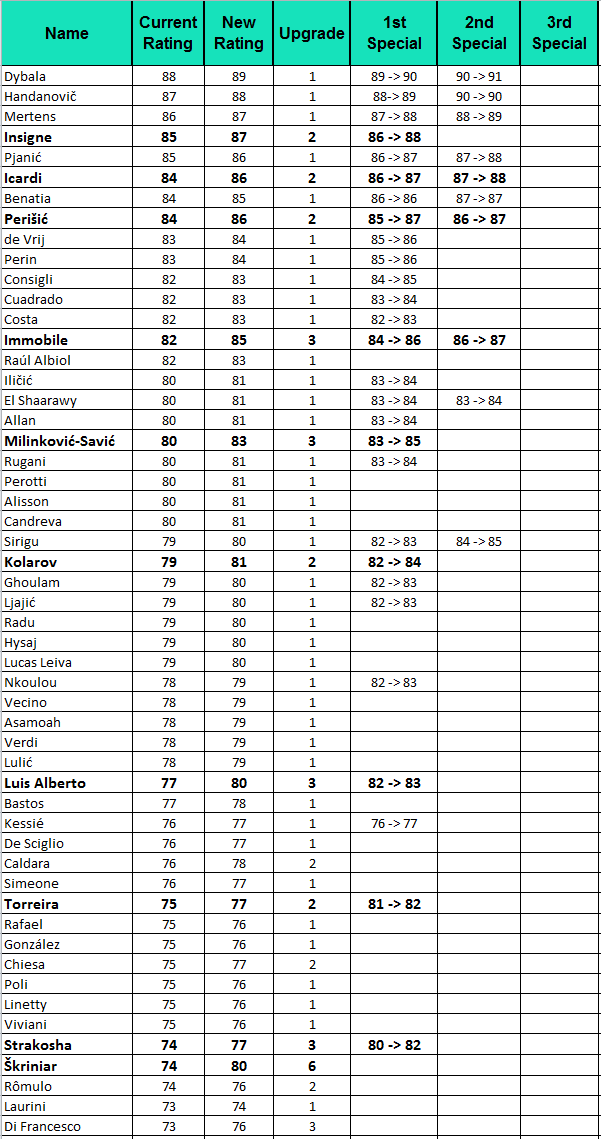