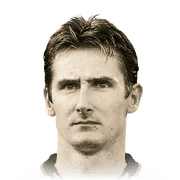 He was my most expensive player after IF Mbappe in Fifa 19 and i wasn't sure, if he was worth the coins. I needed a fast player with OP headers and after i compared all the data I decided that Klose is the closest to CR7 and has also a better value for the price. So i tried him and what should I say? This guy is a BEAST and suprised me already in the first matches. It seems like he can jump higher than any other player in the game and wins 90% headers also against CBs. My goalkeeper Fährmann always shoots to him and he easily wins the header and plays the ball to Mbappe. He is also quick, makes intelligent runs (high workrate) and is agile. His passing is really nice and better than i thought. My attack is really expensive with IF Mbappe, Klose and untreadable UCL Sane, but the rest of my team is cheap and costs not more than 200k (UCL Fährmann, IF Stark, Kimpembe...) and i managed to reach Elite 3 in my last Weekend League (the first time) with this great team, especially the attack with LS Mbappe, RS Klose and COM Sane.

If you have the coins, use them for Klose and he won't disappoint you. Use him together with a fast Dribbler like Mbappe and you have your perfect dream team.

As an older one among the FIFA players, when I was a teenagerI watched Miro Klose starting his career at Kaiserslautern (I live near there, so I oftenly went there watching football live, even though I'm not a Kaiserslautern supporter) and he always has been one of my favourite Players. He is Germany's all-time top goal scorer, the all-time World Cup top goal scorer and World Champion 2014 in Brazil.

So I was very excited that he is now an icon in FIFA.

I first bought his 89 card, which already exceeded my expactations in terms of heading and finishing and surprised me with speed, strength and agility. But his prime card is simply another step above. He is fast... I honestly dont remember that he was so fast in real life. You can feed him with through-passes and finish with both feet. The card says he has 4* WF but it feels like 5. His passing is very solid for a striker, you can use him as a target man, he will forward the ball to your other offensive players. He is not as strong as Lukaku and not as agile as Messi, but he is a very good mix of both.

If you were looking for someone you can score with from corners and cant afford CR7, stop looking, Klose is your man! I score many near-post headers from corners with him (sure, not every single one can go in), I think in terms of heading he is one of the best players in the game.

His finishing in the box is absolutely great, he easily makes 9/10 clear chances from time to time some not so clear chances ;). As I mentioned, dont care about the weak foot, he also scores with his left. You can also try volleys and direct shots with him, he will convert lots of them. Long story short, if he is in a good position, give him the ball and go for a shot!

Although his long shot stats are not the best, he sometimes scores from outside the box with timed finesse shots from good spots.

His stamina is enough to play a full game including extra time, but that also depends on your play style (I always substitude my 3 CAM).

As a striker, his defending doesn't really matter, but he also wins headers on defensive corners.

Only the 3* skill moves can be a con, but only if really need 4* on your striker. For me personally is it only important for my wingers. I sometimes do heel to heel or roulette with him and it feels very fluent and never clumsy.

From my side Miro Klose prime is clearly a buying recommandation! If you cant afford the prime, get the 89, he is like 90% of the prime.

I am sure many of you may be skeptical about picking up this Klose when comparing him with other icons and players of his value, however do not let this sway you. Klose has easily been the most consistent and clinical player I have ever used on any Fifa. His finishing, heading and pace with a hunter applied makes him a deadly striker that will bag you goals. Despite this, you must note that he will only work for certain players, he quite clearly won't be an agile player that can weave through defences but he gets the job done with standard ball rolls and body feints. If you are looking for a striker that can get in behind and play as a target man then Klose will provide you with endless amounts of joy.

++++ Pace: Although he is not the quickest, with a hunter chem style he will beat most centre halfs and be able to shrug them off when he is ahead

+++++++ Shooting: This man will score goals that will leave you breathless, he can finish from anywhere and will not miss a shot within the box

+++++++ Heading: If you love to run it down the wing and whip in a tasty ball for your striker to feed off then Klose will work wonders for you even against players like VVD. He will also score many corners for you which has become a tactic for myself if I'm need of an urgent goal, play for a corner and 9/10 he will make the keep work at the very least

Dribbling: While his general ball control stats get the job done his agility can sometimes let him down if you are trying to do certain things with him however if you use him like a target man and do quick one twos and use L2 shield and L1 ball control he will get the job done for most players.

Skills: while this is not a huge con I would ideally love him to have 4* skills but despite this he is still the most fun player I have ever used.