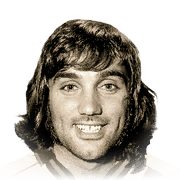 We gotta be grateful with EA that they bring back this beast from the 17.. I was lucky enough to unpack him on my untradable division rivals rewards and what can i say? he´s a complete monster his pace and dribling are outstanding, the aceleration is amazing, his dribbling feels like hazard, he´s not tall at all but he can win headers, the only problem are his physicality and his long shots are not good enough but inside the box he´s a killers sometimes i used him a center forward for more than a Million this card is definitely not worth it.

Cool hair, hes an icon so thats cool. Got him for 460k, instead of fut birthday aubamayang who would have been much cheaper, but IT DOESNT MATTER.

Played with him in div rivals div 3 and used him in weekend league for the last few games. Played alot of really good teams with amazing defences as is usual these days , his first time shots are insane and this is post -every patch and his finese shots are good even without green time finishing or time finishing at all. Hes just a really good player, iconic. I played him at striker because i feel like its a bit of a waste putting him on the RM or RW unless you have an insane team where he would be just an average player but he is by far my most expesnvie player next to prime icon moments pires market whise value.

Hes not strong but if you look at his stats hes not that weak, I used hawk and combined with his good balance hes not that easily bullied unless you are asking for it/make it easy for the defender.

Absolutely worth the pricetag I would say anywhere up to 600k would be worth it for him.

him to play cdm or cb