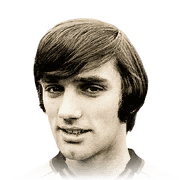 I was looking for an icon replacement for 87 Mahrez for chemistry purposes and i had multiple players in mind: Figo, Best or Nedved. I wanted one of these because they all have at least 4 star weak foot and 4 star skills. This for me is very important since im like to score goals with skills in there. After comparing these players i chose Best and i can say that this choice was a very good one. I use Best with a hawk chemistry style because i wanted to boost his physical stats a little as well. After playing 29 games he managed to score 48 goals for me and he assisted 15 more. I'm a confident division 3 player (+- 2000 skill rating) and when playing fut champs i normally stop at gold 3. Normally my record is at around 14-3. So i can say that i know a bit about the game but im defo not a great player just an addicted football fan who wants to play fifa. Of those games 18 games are from champs and 8 in div 3. The other games were against friends that are around my level so these games haven't really boosted the stats. To start of Bests pace is fucking insane. He feels faster than the TIF Werner for me and also faster than prime Zola. Best is the only player that i’ve used this year besides Mbappe that actually gets away from the defenders which is odd since he ‘only’ has 91 pace which of course does get boosted by the hawk chem style. Best is the best dribbler i’ve used this year and combined with the 4 star skill moves he just doesn’t lose that ball. His passing seemed like a con to me when I was looking at him but its decent enough. He completes the passes the you’d expect him too but it isn’t insane like zolas passing. I don’t know why but it feels like Best has 99 shot power for me, he just bullies the keeper when timing in the green. His finesses are out of this world as well and you can score the first time finesse on both feet very comfortable. He does seem to hit the post for me a lot tho but his shots are never off target when timed orange or better. For me Best has been the most fun player i've used this game and i’d say that if you have the spare million coins and are looking for a great winger or striker you should defo consider this card. However I would not recommend to use him in a single striker formation since he doesn't have the height to win aerial duels.

I was tired of playing with Bale and was looking for a nice winger under 1 million coins. I took a look at middle figo ( 90 ) or this version of Best. I went for Best because of the agility and the stamina. It was a great choice! Best dribbling skills are amazing and he is very fast on and off the ball. His price is dropping which means he is more affordable and definitely worth checking him out. He performs his skills very fast and has a rocket of a shot. Passing could be better but his crosses are decent to good.

For me Best is an upgrade instead of Bale. Bale has the physics but Best is overall the more complete player plus he gets chem from everyone. I haven't tried Mbappe IF so I can't compare them.

Compared to Bale he sometime's get bullied by left backs ( OP ones ) or CB's like van Dijk ( which player doesn't ) but if you know skill moves there should be no problems.

Overall I rate him 9 out of 10. He has great Pace, great shooting and good dribbling and exacutes the skill moves fast. Short pass could be better but with the boosting chem styles its pretty good. The only con I can find is the physical game.

This was my first review I hope it is of any use :)

Excuse for my grammar. English isn't my language.

He has decent heading and jumping, but he won't win much headers.

Can be bullied by some OP left backs.

George Best, what a player and what a card! While picking him up a while ago I was uncertain whether to go with this card or Figo's 90, I ended up picking the northern irishman and that was defo the right decision. His pace is extremely noticeable in-game and with a hunter it's clear to see that he gets the 99 pace, his height and agility adds to that and he truly feels like lightning on the ball. Another key-stat is his 99 (with a hunter) shot power. If you hit a green powershot from within the box you're bound to score nine times out of ten, and his outrageous pace gets him in those situatuons very often. Leading to braces and hat-tricks being everything but a rare sight. His 4 star 4 star is also extremely nice to have, it gives you the ability to do those heel-to-heel flicks and then run away from the defender and green a powershot for the goal. You also don't need to worry about what foot the ball is at, his right is obviously better but his left is fully useable. He may not be the tallest, but his 80 jumping helps him win over quite a few wingbacks and his 87 heading acc is really really nice as well. Even if he doesn't head the ball of a cross, his 99 volleys will certainly not let you down and most of the time end up in the net. His stamina is also more than enough and he will still make those ridiculous runs in the 120' minute and win you the game in it's closing minutes. Overall, I'm extremely satisfied with this card and feel like it's criminally underpriced. He scores every opportunity he gets and is one of the fastest players I've ever used.