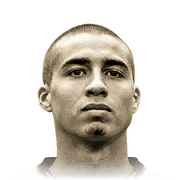 The best ST I've used this year! I tested 91 and 89 van basten, prime vieri, and this guy was the one for me. He's just deadly, put some fast wingers or another fast striker on his side and your attack force will make your opposition fear you every time you're attacking. I played him with nedved, and then with baggio, him+baggio was just cheating. He end up with around 94 games and 91 goals. He's fast enough with hunter, strong enough and can score in anyway you want. Definitely worth the money, actually he worth more than 570k which is his price RN

Finesses shot are good, but he won't score those cheesy finesses with his back to goal