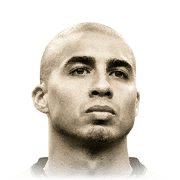 I've tried Trezeguet in 23 matches, 29 goals and 8 assist. I is just the perfect striker for me. Hes strenght, positioning and finishing is just perfect. He also got 4 star skill moves and 4 star weak foot. If you like big strikers that is not clumsy, Trezeguet would be the best striker for you. He has middle low work-rates and thats actually pretty nice, he does not take some wastefull runs so you do always know where you have him.

What can I say about this card other than to definitely try him?!

He always comes up with clutch goals, and after using him pre and post patch, I can tell this new style of gameplay benefits him even more.

I run him with the Marksman Chem style to boost namely his Agility 74 and Dribbling 86.

I am not going to sugar coat the review and say that he is the best striker I have used, CR7 is still the best one for me, however for the fact you can almost buy 3 Trezequet's for the price of one Ronaldo, it's a no brainer if you want to strengthen the rest of your team.

His finishing is no joke, fire it from anywhere within 30 yards and the keeper will struggle 9 times out of 10. His attacking positioning means that he crops up just at the right time, usually on a low cross from Mbappe after he has rinsed the left back, or on the edge of the box with a few skill moves. His 4* WF is good, he usually manages to force a save from the keeper, so you can either try and get the rebound or a corner.

He is best utilised as a central striker with 2 fast wingers, in my case they were POTM Hazard(quality through balls) and IF Mbappe (the link up play is incredible) or as a Striker, big and little sort of thing.

I also tried him in the 2 striker combo with Flashback Chicharito and that was fun to use in Rivals.

Trezeguet doesn't look out of place in FUT Champs either, bullying most defenders and smashing away a powerful shot.

He cannot do cheese finesses with his back to the goal, but still after patch, most timed finesses either hit the target or find the back of the net.

Look at my clips on Xbox to see gameplay of him if you like, GT: Sempihh

Finishing inside or around the box

Can get thrown off ball due to low balance

First of all sorry for my bad english, im from France. This guy is a machine!! He scores every game and i play in divison 2 in rivals and gets elite 3 almost every week. I recomend to play him in a formation with two strikers and two wingers like4-4-2 or 4-1-2-1-2 becuase the crossing is best in these formations and he scores 90% of the headers.

Heading - He is a god in the air and he knows where to put ball so its impossible to for the keeper to save it.

Shooting - He scores all kinds of shots Finess, Driven, Volleys, Headers, Normal shots you name it!

Pace - If you are a player that like fast strikers he is not your man to go for.

Dribbling - He has 4* skills so that's good but his ball control is not the best. But i recomend to use him as a target man so this is nothing to big of a problem