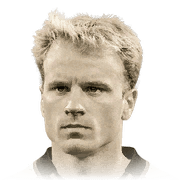 In previous Fifa's i have always fancied trying the bergkamp legend now icon but was put off by the price knowing i could find 4*4* elsewhere and cheaper i figured id get that option as id notice little difference.

This fifa however i had the coins and just figured why not give him a try and honestly i'm stunned by his impact initially using a maestro chem style and later switching to a catalyst he was at first being paired with IF arnautovic up front but it took me a few games to realize he didn't need support so i changed to the 433(4) variation and i have been destroying Opposition, so many messages about abusing my icon 32 goals in the 20 weekend league games i played and he was nothing short of brilliant, he can play like any forwards you could wish for, holdup play creative striker target man finisher poacher seriously he scores all sorts of goals long range smashes taps ins finesse skill move goals bicycle kicks headers from corners you name it he will do it and that isn't even taking into account his potential for assist as well.

Defending (hes a CF though)

Overall great player, really changes games for me. I play only weekend league, and scores almost every game for me from CAM position. More importantly though, he just makes the whole team play better by always being in the right spot to get the ball when starting attacks. Only downside is his stamina, although when setting custom tactics to "Stay Forward" and "Conservative Interceptions" he should still be able to bang in that 90th minute winner.

I had Bergkamp last year as well. And I can honestly say he has improved a lot in game.

I use him as a striker along with Aubamayang and he is just great. Great shot Great dribble. And his pace feels higher ingame than is stated on the card.

He wins lots of headers and a man this man scores. I think he is cheap for the coins you get him. Had a lot of strikers. Like Van Basten, Van Nistelrooy, Trezeguet, Larsson, Maradona, All Prime and I can honestly say Prime Bergkamp is the best I had. The only thing is he can get knocked of the ball too easy sometimes. Stamina is sometimes in the end of the game near gone. But for the rest he is worth it.

After playing over 500 games in Fifa 18 with this card, I decided to use him in this years Fifa. First I went with some other Icon CAMs but the cheaper ones disappointed me. Prime Rui Costas finishing is trash, Prime Hagi is really weak, Prime Laudrups shooting is kinda whack and Prime Okochas stamina is ass.

While the CAMs up to 2 million coins were definitely better, most of them had some cons to them. Seedorf and Socrates turned slow because of their agility. Up to 1.5 million Coins I would suggest using Prime Bergcamp or Del Piero. Both of them are amazing, while Bergcamp is more physical and Del Piero a little bit more technical. The only problem with him is the low balance.

Bergcamp has M/M workrates but with his amazing positioning it doesnt matter. As a CAM in the 4231 he regularly switches position with the striker. His overall technique paired with his strength makes him deadly in this meta.

He scores from everywhere and his WF feels more like 4.5 stars. His composure is simply amazing. So if you happen to miss a chance, its your own fault.

On the mission to find the perfect striker, for me, to put beside 87 Timo Werner in a 4-1-2-1-2 (2) has been a difficult one. I've used van Basten (baby and prime), 91 Klose, Butragueno baby, 89 Lineker, 88 Raul, and Prime van Nistelrooy. After the timed finesse shot got wiped off the planet, I like everyone else, have been trying to find a consistent way to score goals, and have fun in the process. 92 Bergkamp has accomplished that for me. He's not the fastest, most agile, or best passer. However, he is consistent in a game that has no consistency. Dennis is where you want him to be when you want him to be there. He can outrun and hold off some defenders, he can skill past others. Get him a chance, and he will put it away. He might not wow you every step of the way, but he will round out your team. He's not worth it if you're looking for an icon to add to an average team, but he will make a great team even better. His link up play is fantastic. In the 4-1-2-1-2 (2) with Werner to his side and Reus behind them both, my attack is complete.