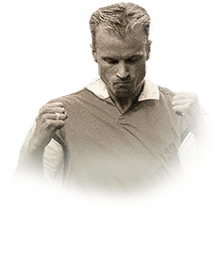 The only FUT player that has forced me to do a review…. ever!

If you can get this card for around 2.1mil you are laughing!

With how messed up the game mechanics are this year, it was this guy alone who has got me playing FUT again.

Scored the winning goal in 4… yes 4 of my last 7 FUT champs games to clutch Gold 1 with a couple games spare. Most insane long shot volleys i've seen and just breezes around the pitch like he owns the place, even if he doesn't do anything all game with 99 composure it is almost certain he will contribute an assist or a goal before final whistle.

I found you wanna play him at CAM or CF behind a guy with good jumping in order to fully utilise him e.g Ronaldo, Torres, Perisic live….even that freak Ben Yedder live.

It was fifa 18, when i first time saw his card.. Not so much pace, amazing shooting, very good dribbling, great stamina, 10 on the back and great in-game model. I told my mother that I fell in love for the first time today. When his loan over, i was very upset, besause i don't have enough money to unlock his card. But i knew that he would come back. And he come back. I unlock his card for 900k on PC, for me it is a good price because PC prices is so high on cards like this. I play with Dennis in 4-2-3-1 at the beginning on ST and after on CAM. Forgot ST, he is a genius CAM! On ST he sometimes misses good chances, i don't know how, maybe it is this broken game but on CAM he is an absolutely brilliant. His pace is very good with engine, his shooting omg no words, dribbling, passing, he even scored 3 headers for me! His stamina is good for me, i give him fitness card before every match. Overall he is a very very good card, card for soul, card for fun. Thanck you guys for attention, love Dennis Goalkamp!