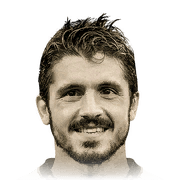 I was lucky enough to pack this beast and im glad i did, I honestly wouldn't of tried him otherwise, he has a knack of being in the right place at the right time, defensive play is his strong points so much aggression he basically bully's players until he gets the ball if you do let him wander forward i would recommend passing the ball of to someone that can shoot

he replaced Kante in my team

I actually packed this Prime Gattuso 1 month since the game started with Salah in the same pack. I was hyped and couldn't wait to use this guy and write a review afterwards. Got to admit that i was a little dissapointed some division rivals matches and a weekend league later. I consider myself a slightly above average fifa player, so i expected from this guy to be very effective and game changing for me and ALMOST but not as good as Vieira that i had last year in fifa 18, and a better option than Kante ( i still had not tried Kante at that point). As i said this guy did not impressed me that much so i came to the decision to sell him and buy Kante and Ramos with the money i got back from Gattuso and Division Rivals at that time. After i used Kante i was convinced that the small frenchman was the way to go and never looked back since. The reason i state that Kante is the better choice is because he is currently 300k cheaper and more effective than Prime Gattuso. Kante feels faster than Gattuso because of his actuall pace and dribling stats which is the main factor that makes him the better choice and player IN FIFA. To say it in other words, he just fits the META better than Gattuso. If you take the game seriously and wants to be competetive save some coins for another player upgrade in your squad and go for Kante instead.

Alright, enough with the Kante talk in Gattuso's review... lets jump in to the pros and cons, so you can get a glimpse of what my exprience was with the explosive Italian. ( I used him in a 4-1-2-1-2 narrow with a shadow chem.style.as a lone CDM.)

*Really good marking, he is almost allways glued to a player from the oppsite team.

*Good tackling as the stats and traits suggests.

*Excelent stamina that makes him to last the whole game and be good in the extra time.

*Alright pace with a shadow chem.

*The passes are nothing special, but they are okay as long as you don't misplay yourself. He have a very low curve so he won't make anything amazing or a breakthrough into the oponents defence, but that is not to be expected from a pitbull type CDM that is there to recover balls,intercept, break and give it with a short pass to the team mates around him.

*Dribbling is bad, although the balance is good, agility ball control and dribbling are not that good and he feels kind of stiff and slow on the turn compared to Kante. Still better than the tall type CDMs with low pace and agility.

*Heading is bad. He won't win you headers and he can't jump. He is still higher than Kante, but they are both bad in that section.

*Height. The heigh is not that good for the fifa game. And here is why Kante beats him. They are both short guys that don't have the long legs that reach the opponents players easily, but Kante is much faster than Gattuso and catches them with speed and that makes up for the height. Gattuso is not as fast and thats why the reach is much more noticeable.

*Shooting is bad. You got lucky if he scores you a goal.

*Presence on the field. THAT WAS THE BIGGEST factor that made me sell him. For some reason you don't feel his presence on the pitch as you feel it with Viera or Kante. Sometimes you wonder where the guy is when you consided a goal. I didn't fell that he made that much interceptions and that was really surprising for me, because he have 99 interceptions with a shadow chem., and you expect him to be very noticeable with all the interceptions he makes. But he didn't for me.