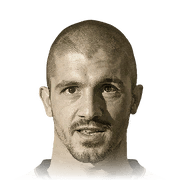 Hi Guys, before you go any further ignore the squad I used, I keep changing it every now and them so it's completely not relecant ...

Ok, about baby Gattuso then, let's start shall we ? Sometimes is good, sometimes is s h i t ? Hell no !

This is the CDM you need this year while saving for Vieira, what a guy this is. Pitbull of your midfield, say baby Gattuso and imagine Kante but a bit taller, much much stronger, more aggressive and in general much better defensive-wise and he has very underrated "backs into player" trait which makes shielding the ball far more effective + it helps you destroy and bully other players.

Put it this way, I thought I am being smart when replaced him with Kante, highr rating and pace, lower price, hell no .. Been selling Kante quicker than you think, he is just nowhere near Gattuso quality, you must try him to understand.

Also I am using Gattuso with backbone and his passing, both short and long is superb too, been using earlier with engine and he was also great, those who like pace they can use anchor, catalyst, his defensive ad physical stats are so good you can even go for artist if you wish haha .

Also used his prime earlier, that was before Kante, been using prime, sold to get Kante and being smart saving coins, and then after realising my mistake bought back the baby one. Both are just as good in game, only difference you may notice is the baby one feels a bit better on the ball but the difference is very small, go for the baby one if you can.

Gattuso is CDM who stays back all game, he cant shoot, remember that, scored me 2 or 3 goals in 150+ games :) his heading isnt good but its not needed as he will usually knock his opponent before he heads the ball and simply win the position, block him, intercept, never gets bullied, never gets injured, he is a bit of a MMA fighter on teh pitch, remember that movie "300" ? He even looks like one of those guys.

Also he is very cheap icon, get him you wont regret it !!!

Pre-match Italy-Germany, World Championship 2006, responding to a possible yellow card that would have left him out of the final]:

"I would put a signature as big as a house to see Italy in the final even without me. I will not think about the card, because if I do it I do not play as I can. It will be a test of maturity; a test with myself. It seems, however, that the admonition has already given it to me: it's not like I have to put the band of Rambo and go and force it; I'll eat the card. "

This phrase resume very well the player, but beware: be patient with him. The first matches I was so disappointed, I really want to sell him istantly. I changed the chem, and the instructions as well, and now I can say that he'll be in my team till the end of the year.

The key to use him at the maximum potential is the position in the pitch and the instructions: he is not a central median able only to intercept the ball to restart the action, he's mainly a surly player, he is super to press and get in the way of the opponent. He defined himself like a "cagnaccio", a chaindog. So ask him to mark the man and not to intercept the ball, trust me. That will change the way he plays, you will have a gladiator with 75% of stamina on the 90th minute.

Pace, dribbling, passing and shooting: the stats don't tell lies, but anyway I cannot say that are so terrible. Same feelings as NIF Kante.

In real soccer teams pray to have a guy like him on the pitch, and if you really like those kind of player you'll appreciate him.

Strenght, feels better than 84 IG, and he looks stocky and bigger than he actually is

Of course technical stats, if you expect to play him as Eusebio or Cruyff