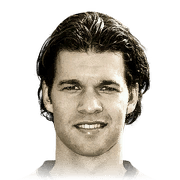 AS a CAM: Never used him as a cam so i cant really write a review.

Mostly, i used and keep using this card as a CDM with shadow chem style along with Kante. I paid 1.3m for this 89 rated version of him and i find him to be extremely good in key situations. He is one of the key players in my squad who has the ability to start an attack and he is involved in almost every goal i score even as a CDM. He never pushes high up the field but his positioning is between the middle of the pitch and my ST while i am attacking. He is one of those players that he can help you offensively and defensively. Even though he pushes a bit up the field he always runs back when i lose the ball and he can stops the attack.

Shooting inside the box

His agility sometimes but you wont even notice it most of the games.

I mostly tend to buy balanced midfielders when it comes to icons, I mean box-to-box ( Prime Keane is the exception, he is a beast as cdm. anyway this review is not about him). I tried prime Veron but I don't know why I did not like him. I traded a bit more, pushing my limits and I bought Ballack. My oh my. The change int the midfield was amazing. This guy is another level. His passing is accurate. But the shots, ooooh the long shots especially. If they don't go in you sure have a corner the worst.I am not an elite player, only average. I don't score many goals with my cms, I prefer to pass to the cam or he strikers to do that job. But this guy is more than capable of scoring screamers. His stamina lasts till the end of the 90 minutes given the proper instructions. I mainly change him the 70th minute or so because I make him run a lot :) Another thing is the headers and the free kicks. If you know how to use free kicks, never mind the distance. He blasts them in. As for the headers , he is a dangerous guy for the opposition. The only cons for me ( just an observation )may be the agility and the balance (I used an Artist chem style to solve it). Sometimes he seems slow and again sometimes he can loose shoulder to shoulder battles. But that is no problem for me and if you know how to shield shouldn't be a problem for you either. Never noticed if he had a weak foot. He seems like a 5 star week foot guy.

I never used him as a CDM, I already have Roy Keane there for the job but as far as I can see from the interceptions and the tackling you can use him there also.

If you have the coins buy him. He really is a game changer IMO