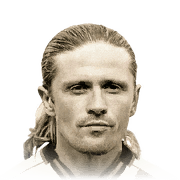 I've been buying, selling, and trying out a number of icon mid-fielders as well as CBs who can move up to play CDM in games (88/90 Petit, 88 Keane, 88 Matthaus, 88 Veron, 90 Rijkaard, & 88 Moore) for the past 2 weeks. And 88 Petit has been definitely my favorite thus far. I really really enjoyed using 88 Keane, but Petit was on another level. I immensely enjoyed playing the prime version of Petit in FIFA 18, and he was my starting CM till the very end of the title - this one feels exactly the same.

His H/H work rate with 91 stamina has been providing me with a CM of unbelievable field coverage in the game. His well-rounded stats have allowed him to assist, score, and defend exceptionally well in a consistent manner throughout 10+ games that I've used him. Aside from his 3 star weak foot, which honestly is not noticeable, there was seriously no aspect of his game that was lacking. I truly feel like this is a card you can use till the end of FIFA 19 and a CM that you can build your team around in any formation.

Compared to 90 Petit, 88 Petit felt pretty much the same, perhaps due to only minor stat differences (-1s mostly). There really is no need to pay extra 200k-300k more to buy 90 Petit over 88 Petit. I highly recommend anyone who has enough coins to try him out. You will be amazed of how big of an impact he makes to your games.

I had been searching for a cdm partner for Kante for quite a while, using an untradable fabinho and trying out Makelele, who did their jobs but didn't have that special something. Then i saw this Petit and decided to try it out, and he instantly impressed me.

Firstly he is such a character on the pitch with his signature Pony tail i think he gives your team a uniqueness that a lot of other teams don't have and being very noticeable on the pitch makes him an easy passing option. His defending impressed me instantly, he was intercepting balls left right and centre and making Pogba look like a little girl. His passing is very nifty and very reliable ( definitely better than 81). I think his stand out feature is his physicality, he's never been pushed off the ball and is tall enough to win headers and be a target for goal kicks.

His stamina and work rates are ideal with working next to Kante as they cover the whole pitch for the whole 90 mins and run the game towards the end. His shooting surprised me, he scored an amazing knuckle-ball like longshot in his first game which i honestly didn't expect him to score. I think it is very nice to surprise your opponents with attacking cdms and they dont expect a shot which makes it a whole load easier. Lastly his dribbling is average, nothing special, but cdms aren't needed for dribbling as is his pace.