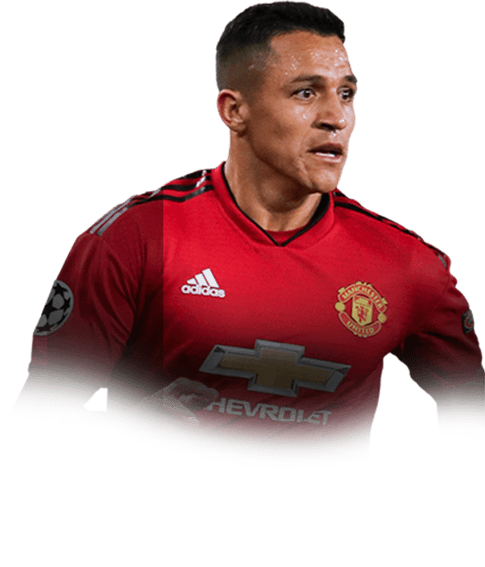 His normal card is pretty cheap which brought me to think that Alexis and any special cards would be pretty weak despite the good rating. I haven't used his normal card but this one surprised me. I had low expectations for him but since I got him in a pack I decided to try him out in my team, after a few games I've decided to keep him permanently.

Hes got overall good stats, only issue would be his pace but it's nothing the correct chem style doesn't fix (in my case catalyst).

Pace: Base stats give 83 pace but chem style boosts this up to 93. He feels as fast as a LM/LW need to be this way but even without is he feels fast with the ball thanks to his dribbling.

Dribbling: Definitely his best stat and the numbers say it. 92 agility, 87 ball control and 91 dribbling along with 4* skill moves make him lethal attacker. His dribbling feels faster than many other similar players.

Shooting: Good numbers here too. Almost all his shooting stats are around 85 so he's pretty good at shooting in any scenario. Although I have had some issue with his shooting with finesse shots sometimes. His attacking position is great and his high acceleration helps him beat the defender to the ball, many times getting a 1v1 with the keeper.

Passing: His passing is higher when compared to other wingers who generally have passing below 80. With the chem style I'm using his crossing is boosted to 98 with 86 curve making him a very good crosser. Short pass and long pass are pretty solid thanks to his vision.

Physical: Another firm stat. Much higher than other similar players, he can run, jump and despite only 73 strength his 81 aggression makes sure that if he loses the ball he can win it back.

First, take a look at the stats of this player. Apply a Hawk to his card so that we talk about the same player that I have used in game. For me he does not look that special compared to other META cards, I don't know what you think.

But what I can assure you is that since he got boosted to an 89 rating he feels like an absolute monster on the pitch. I mostly play him as a central CAM in a 4-2-3-1 formation, sometimes switching him to the left CAM position, always on stay forward or otherwise he would drop too deep due to his H/H work rates. Division 4 and Gold 2, rarely Gold 1, is what I achieve with my team, maybe 10 Squad Battles games with him.

Lightning quick, although he only has 86 sprint speed. Please don't be fooled to think you can outrun defenders like Varane. I don't think any player in this game can. But if he has a good lead with the ball at his feet he is not gonna be caught.

Lethal (when on his right foot). With Hawk shooting is 92 overall and you can definitely feel that. Always in good spots on the pitch, making runs in behind as a CAM, incredible shot power if you can hit a green timed finish, insane curve shots and overall very composed in front of the net. Sometimes you do feel the lack of long shots though. I try to avoid using his 3 star weak foot, let's you down every now and then.

Good for link-up play. I do not have any player in my team that is extraordinary at passing. I play very narrow. Mostly through the middle with an occasional cross from my fullbacks. So Alexis only needs to take part in short passes, rarely hitting a long pass. He doesn't let me down at doing that (other than in RL lol).

Pit. Bull. I am not very good at doing skills, fooling my opponent etc. I am sure he will be very good at this, too. Alexis can take quick turns, everything that his stats would suggest. But what I want to point out here is his incredible ability to shield the ball at full sprint, keeping his balance and outmuscling almost any defender. He cannot be pushed off the ball. I have never felt any player this strong on the ball.

No need to review his defending. He is fully offensive-minded. Wins some tackles when pressuring an opponent due to his high aggression.

This includes parts of what has been said about his dribbling already. Complete Alpha Male, doesn't get bullied. Adding to that he has 99 jumping! I do not keep track of his heading stats but I'm sure he wins above 50% of them. Some corner goals. Does not outjump players like Varane or van Dijk as almost no player does. Definitely handy though. His stamina is enough to last the whole 90 mins, does need to be subbed in intense matches sometimes (he runs a lot).

All in all Sanchez is a card that I do not want to replace any time soon in my team. He is very versatile in his roles, too. You can play him as a wide mid, CAM, CF or ST. He will be doing his bit every time. I got his card for 185k, I do not think any player for much less than that will perform better.

Last thing I want to add: Before he got his 89 rating I already played a good chunk of games. You really felt the boost when he hit the 89 rating. Since then his goalscoring and assisting stats got way better. I reckon he would be on at least 0.65 goals per game if I had his 89 rated card from the start.

Absolutely magical. Playing him in a 4-1-2-1-2 (2) and he has absolutely insane in CAM. I bought him with a Hunter chemistry style and lemme tell ya, he bangs in goals every single game. I play IF Richarlison and FUT Birthday Martial up in strike and he essentially plays like a Shadow Striker, he waits for a solid opportunity to run in behind and once he gets going it's really hard to catch up to him. Play him in a Stay Forward Instruction and that's it. Because of his H/H work rates, he tends to come back a bit deep but it's never really any trouble because he always manages to reposition instantly, giving you an opportunity to launch a counter-attack. He manages to win 1/3 of his headers, mostly due to that ridiculous jumping stat of 93. But don't expect him to win all the headers, especially during set-pieces and don't judge him based off of that. The 3 star WF can be a problem in certain long shot situations but if you're in the box he will definitely score 99% of the time, the 1% being EA just f**king u up for no reason at all. I still want to see what he's like with a Maestro, Deadeye and an Engine but I definitely recommend putting a Hunter chem style on him if you want a decent playmaker and an amazing 3rd striker. Can't wait to try him out in WL after ripping life out of people in Rivals