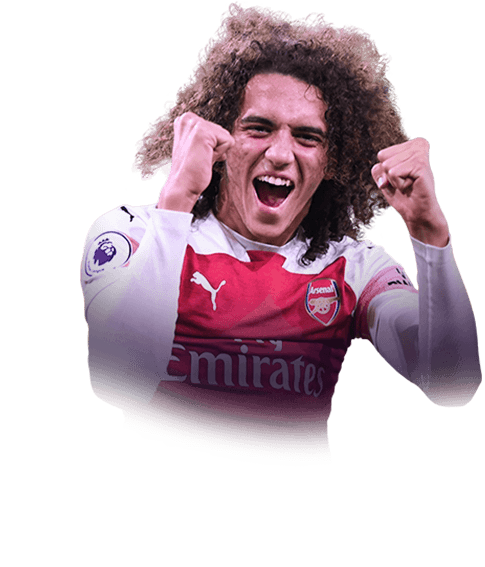 A fair deal for 500k before you upgrade to an icon.

Everywhere in the middle field

Stuggling getting ball back from stronger player like Pogba and Ibra

When I saw the Future Stars Promo, I was immediately drawn to this card. I was lucky enough to pack him in a 100k pack and immediately put him in my team as he fit perfectly. He has perfect all around stats for a Box to Box CM but can also drop back to CDM if needed. The major thing that stuck out to me is his speed. Having high agility, balance and acceleration, Guendouzi is an absolute rapid player that is a very quick center mid to use. His passing is exceptional with a mixture of short and long passes due to the perfect weight he puts on the passes to get them into the hard to reach places. I found that his interceptions is his key defensive stat as he was able to poach the loose balls with ease. He will not be a tank of a CM like some of the stronger players in the game but was never really pushed off the ball easily. He has crazy ball control and is able to keep the ball close to him to stay composed under pressure. I also found that, even though his attack positioning stat was very low, he was able to be in position for passes where he needed to be. Finally, all of this culminates with Guendouzi's long shots. If he is given enough space, the mix of shot power and long shots is insane and will most likely score you many goals. Overall, Guendouzi is one of the best CM's I've used this year because in game he is an all around monster on the pitch.

Shooting (Long Shot machine from many positions from distance. His finishing is subpar if in the box but can make some of the close range shots)

Passing (Perfect passer, is able to put the ball in the tough to reach places with ease with the right power as to not overpower the pass too far)

Dribbling (Very composed player, he can hold the ball close to make quick cuts around the defender)

Defending (Most impressive stat is his interceptions of the ball, can make the cracking tackles to stop attacks and has good defensive positioning)

For me as the big fan of Arsenal this card was must buy for me. This review is general as if from player fifa.

I bought him for 500k and i dont regret any single penny. I played with him in 3rd division and I love this card. I play him as cdm a long side with matuidi. He is so fast, that he can catch up with anyone even with TOTY cards. When he is somewhere around the box you can just take a shot with his 94 long shots. At defending he is way better than 79 on his card with anchor he is on 87 defending and he is just awesome. His dribling is good as well and awesome for midfielder. The worst part of this card is propably his sprint speed but you can fix it with chem styles like anchor or shadow.

If you are wondering about who to buy betwene pogba, kante or guendouzi just go for guendouzi you wont regret it. He can play anywhere in midfielder cm, cdm or cam.