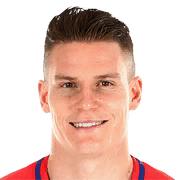 Firstival I want to say my englisch it's horrible.

I buyed him because I needed a france attacker from LaLiga to link Ben Yedder. He was very cheap and had 87 pace and 84 shooting. I didn't have so much hope that he is a good striker but he was. His Longshoots are pretty good and the headers are amazing even though he has only 71 one physicality.

weak foot (for shooting okay but passing is very bad)