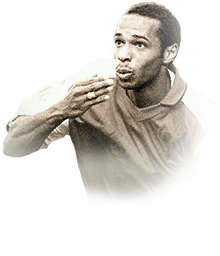 after using the 93 version of Henry, this version seems to be much more perfect.

Don't get me wrong, this card is amazing, but there are some points which let him down.

To be honest, there was not the big difference between his normal prime version. Vor nearly double the price, i would prefer the 93.

In case of the workrates, TOTY Mbappe or Eusebio are doing their job much better.

First of all, sorry for my English.

Henry is my favorite Player of all Time and it was allways my dream to play with him in FIFA.

So this Year i had the Coins...but their were so many other good Strikers like Eusebio and you know, you want the best player, also i was scared because of his Workrates M/M.

I said fuck it, i want to enjoy this game and want to play with Henry.

Guys... Best Decision i've ever made.

Individual Tactics: Run Behind the Defense line and Stay forward

Where do i start.

Shooting (10/10): If you thought after the Big Patch Finesse Shots are not as strong as before, Henry will proof you wrong. With the Finesse Shot Trait, 90 Shot Power and 98 Finishing, its allways a goal, even if from a long distance, its like the Patch never happened. Inside the Box its allways a goal, you dont even have to use Timed Finish.

And his positioning is on Point, like a said, i was too scared because of his Workrates but he allways ready and free, his runs are perfect and Henry is ready to score

Passing 8/10: With Marksman his pass was bad, with Engine its very good, i wouldnt play him as a CAM, but for a striker i think thats enough.

Dribbling (10/10): With Engine or Marskman, Except of Balance and Composure, everythin is 99, this Player is so enjoyable to play, he dribbles like a Butra or Eusebio, but he is 188cm Tall. Balance is sometimes an issue, so if you play against a Van Dijk, its possible that you struggle a little bit, but definetely not a CON, because with Engine he has 80 Balance and with 99 Agility its definitve acceptable.

Physicality (7,5/10): He can hold the Ball, he wins sometimes duels, but also loses if your opponent has a player like Vieira, Van Dijk etc. His Headers are great, but its not a Ronaldo, so he wont win every Header in the Match, but if he does, its 9/10 a goal.

Henry is definitely a Game Changer, in my opinion he is one of the greatest Striker in the Game, i would even say better than the NIF Ronaldo.

If you would ask me, would you buy him or do his SBC if you were not a Big Fan of him, probably i would say yes after i played his Loan Card, but for his Price of 2.600.00 Coins, theire are a lot other Alternatives who would do a great Job too. You can compare him to a bigger Agüero or a faster and smoother Lewandowski.

So I will start off by saying that my team is pretty ridiculous!! My pack luck while completing these Icon SBC's were pretty insane thanks to end game deals and what not... ANYWHOOO on to the review.

I was quite surprised how little i have actually seen this guy in teams all season. Stats are amazing, 6' 2", and pretty recent of an Icon so a lot of people are familiar with him. Thierry Henry is a BEAST!!! He always seems to be in the right place at the right time. He has ridiculous shooting and can find the net almost anywhere!! His ability to stay on the ball when getting bumped, bruised and bulldozed are all fantastic!

in 20 WL games, i have scored 27 Goals with 14 Assists. Having him paired up with Cruyff and Pele pretty much guarantee that he finds the ball and is in perfect scoring position. The only concern regarding this stud would have to be his balance. Even with that, i have played with him using the basic chem style and still put in work.

If you are really considering to do any of the Icon SBC's before the game is over, definitely try out yo boy Thierry!!