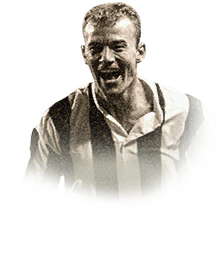 I did the SBC for big Al thinking that his 98 shooting would be a game changer and he could lead my attack on his own, and he offers wonderful positives and painful negatives. I put an engine chem on him to try to balance his weaknesses and honestly it feels no different, hes simply only good as an in the box chance taker, and if you try anything else prepare to be disappointed. Overall, if I could have the coins and players back I used to get him, I would. He cost around 900k to do and I'm positive there would be better performing players out there for half that price.

• Fabulous at shooting in the box with 99 finishing and 99 shot power, it's very noticeable. Even under defensive duress, he'll score far more than miss or draw a save

• If you can get the ball on his head at corners, 99% of the time you've scored. Best player I've seen in this regard

• Stamina is very good, never needs to be subbed

• The big stand out negative which will be a killer for some players, he is HORRENDOUS with the ball at his feet. His passing is below par and honestly don't bother dribbling with him, he moves like a fridge with the ball.

• Very frustrating this, hes a player that's so good at heading the ball, but never gets in position, always lurks outside the box

• Is a lot worse physically than his stats would have you think, quite poor at bumping off defenders and holding the ball. Honestly his 90 strength feels more like 70.

• Shooting is noticeably poorer on his weak foot.

After reading the review for this card before completing him for cheap (200k, used alot of untradeables and got lucky in packs) i believed it made him seem pretty useless. However, that is not the case. The card's obvious pros are his shooting. He does not miss 1 on 1s and ofter scores absolutely insane long shots. Excluding lampard, the two main forwards i have supporting him are ucl messi and potm hazard. These two cards are good, but if the person can defend against proper football well and not crosses/long shots, i struggled before buying shearer. Now i can win games purely because of his 98 shooting, that is all i have to say about that. His passing is good enough to be a striker, i move shearer up to striker ingame, so i dont play him CAM as the attached team suggests. He has better passing then alot of icons that are similar to his price, so that is not a worry. His main and only massive problem is his dribbling, he often gets caught on the ball in situations when messi or hazard would break free, this can slow attacks. This is why he can NOT play cam, so don't consider it. His physicals are great aswell, with enough stamina to last the game and enough strength to often stand his ground against even the better defenders. His height is good but nothing amazing, if he wins headers near goal they will usually go in, but he loses headers to defenders alot taller than his 6"0 frame such as ramos and Van Dijk. However, overall i recommend this card, but right now do not buy him unless you can do him for cheap, as TOTS is happening. His pace is only good if surrounded by other good, quicker players that can counter quickly and get the ball to shearer in space, so he can use that 98 shooting and not that 80 dribbling