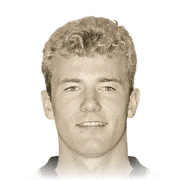 Alan Shearer, I've all 3 of his cards on Fifa 18 and didn't like any of them. On Fifa 19, I struggle to score goals, even 1v1s, so I decided to try out this card for Fifa 19. I know its early, but I honestly think that this will be the best striker I will use in Fifa 19. He scores everything, with ease. If its on target, its a goal 9 times out of 10. Long shots look so easy. This man could jump over anyone and score a header. I've used alot of great strikers in this game already, and this 89 rated Shearer is easily the best I've used. If his price drops in half, I won't even care, I am never selling this guy.

Unexpectedly amazing! I play him next to Headliner Arnautovic and he his insane. His shooting is top strong and powerful making his weekfoot not an issue. For 490k this card is worth a chance if looking for a clinical finisher in any side. He has played around 10 games for me and scored 14+ goals in division 4 agaisnt some heavy loaded icon teams. His agiltiy and dribbling hasnt been an issue so far as he feels comfortable on the ball without a chemistry style to upgrade it. One of the main reasons I bought this card over others is his 90 + jumping and heading. Athreat in the air with crosses and corners. Makes van dijk and ramos feel small! Overall this card is definately worth a shot in your squad!!!

Passing - Good for a striker. Can play nice short passes and the occasional threw ball

Composure - Clinical under pressure, one on ones and in tight angles

Skill moves - The only major problem with this card is he is unable to perform advanced skill moves when attacking (The ball roll is still very effective as is the heel to heel).

Agility - If you are a player that likes to dribble with one player consistantly then maybe this card isnt for you. He isnt as agile as a player like mane but still knows how to beat a man one on one.

I got this man in the middle icon sbc and he is a decent player. He is good at hitting timed shots, although is very bad at finesse shots. Surprisingly, he is not very good in the air, even with 87 jumping and 91 heading. Yet, with a hunter he feels very fast and is able to get in behind the defensive line. Yet, with his bad dribbling/agility, he feels slower than he should. Finally, his passing is ABISMAL. It is honestly hard to even attempt to do link up play with him. But, to end on a good note, he feels very strong because of his combination of height and strength.