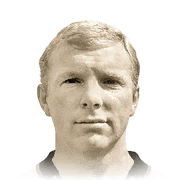 As a West Ham fan i was highly anticipating using this card. he wasnt in fifa 18 which was a huge blow to my team plans. but managed through. I averaged Elite 3 every week last year. so i can say that im a decent little player. but anyways. i have played 57 games with Moore. and so far there is no major concerns. i went 22-8 in WL this time around. and to say that you can pick up Bobby Moore's prime for around 500k is a absoulte steal. hes a rock and with him and ramos as my centreback partnership. there wasnt much that would get past them. Also a decent player to go and pick up a header from a corner

Alot of people are thinking im a credit card abuser because of my team. and tbh i am. ive spent over £120 this FIFA and ive not had the best of luck. ive packed Lloris and also Aubameyang so theres around 500k aswell as a prime Esubio in Divison Rivals rewards. so i managed to build a "Mega Team"

Decent Speed to get back behind the ball

calm on the ball

Lets just say. he isnt the person u want to start a counter attack. or be at the end of one.

Before I bought Moore I played with Thomas Partey from Atletico on my CDM. He was way too offensive and that led to the fact the my opponents scored a lot of counter attacks. After I've bought Bobby Moore that has changed, and I rarely concede from counters. The thing I am most impressed by is Moore's ability to always be in the right place in the right time he intercepts a lot of through balls. And after he has intercepted the ball he has the abilities to make a great through ball to either Messi or Koke scream. I haven't tried a player who could make as good long passes as Bobby Moore. But there are also some challenges with Moore. He isn't as tall as I could've wished, which means he losses a lot of headers on goal kicks, even he has good jumping and heading. He's pace can also be a problem in some situations, where I make a counter attack and he isn't fast enough to get the maximum out of the attack, but that wasn't what I bought him for, so it's not that bad.