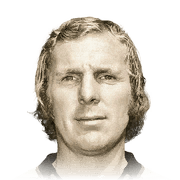 I’ve used 89 Moore over 17 online matches so far and have been pleasantly surprised by his ability to defend & pass. I started him at CB for 10 chem and switched him with a CDM who can play well as a CB (e.g. Eric Dier). For anyone who’s looking for a budget icon, this is a very very good choice.  He’s also a good investment to sit on as this, one of the cheapest icons right now, will rise in price once prime icon SBCs roll out. He has been exceptionally good at intercepting the ball & stand-tackling. He has also been superb at passing. As his passing #s would indicate, his passing is consistently accurate and ideal for a sit-back distributor of the ball while playing a possession game. You can easily corner your opponent’s defense into the box and simply pass around the ball till you find your scoring chances. With the Shadow chem style, he felt pretty rapid and fast enough to back track for counters.