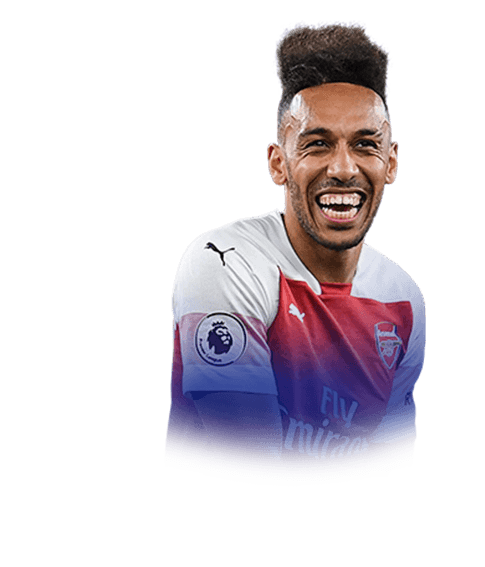 I was really lucky that I got him from my gold 2 fut champs rewards. So I played him at striker.

First impression: wow, just wow. He is just amazing in this game. He is fast, he has a unbelievable shot and can dribble reaaly well. his physical and his heigt are great too

and the 4* combo is just amazing. He can also head the ball in the goal.

I use the chem stylen engine on him because that gives him +10 balance.

I play in the high end of division 2 and played the weekend league with him.

Maybe you think that he scored a lot of tap ins, but no. He only scored 1 tap in and the rest was just beating the keeper.

First I had Stoickov, who is still great, but neither as good as Auba.

His weak foot is also great and he can score really easy with it.

He runs the whole game and can easily spint past other defenders, even shoulder to shoulder.

He is a really expensive card, but IF you have the coins he is 100% worth it.

The team that you can see is how I played in game, everyone was on full chemistry.

I can't think of any

Whatever you could want in a striker hes got i. pace dribbling (massive improvement, reason i didnt like his other cards) strength heading skills weakfoot. great for a long ball great as a target man i could go on and on

Troopz would be proud

What this man does on the pitch simply makes you say WOW.

I first wrote a review on TOTS Hazard and I wrote about how I expected something insane cuz it's a TOTS card but boy did I get that insane value in this card.

First game against a team full of top icons and this man scores a hat trick on his debut in the first half.

I use him in the weekend league with a marksman and this man believe me scores a hat trick every other game and that's within the first 25 mins.

You give him the ball and he will finish it.

Left foot, right foot it's in the back of the net.

He is simply insane.