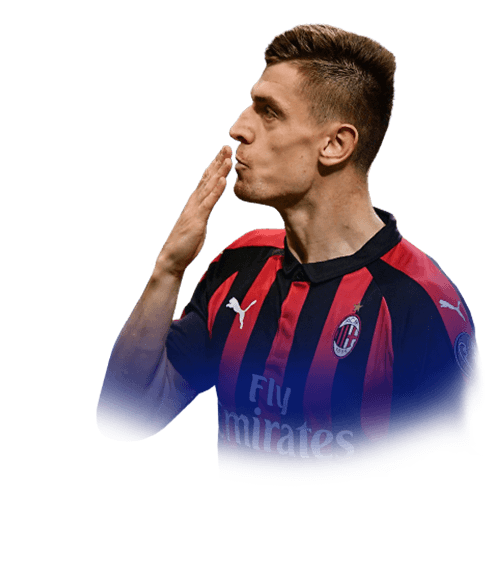 His real-life stats are currently 1 goals and 0 assists in 3 matches in domestic competition. He also received 1 yellow cards and 0 red cards.

Close the windows, doors, hide your kids because when Piatek starts shooting he will never miss. Piatek is probably the best striker I have used this year FIFA I play on some casual level one could say. Strikers I have used are: Rashford, Martial, Lineker, Son and there are some other ones but who cares all about Piatek. There's something about Piatek that just makes him stand above all he has 98 or 99 in all key striker areas and if he had 4*/4* one could say he is and end game striker but to me 4*/4* is not important the way I play FIFA anyway and because FIFA 19 is so broken it feels like weak foot doesn't even matter players like Perisic or Son miss sitters at times and they have 5* week foot.

I have other players from whom I can spam la croquettas and all that stuff. Piatek is Lone striker in 4-2-3-1(2) ( I change to this formation when in game) and if you are abusing crossing he is the man to go to. I really wanted to pack him as blue but instead I got him in my red picks and I took him over Frenkie De Jong because A) I wanted to use him and B) De Jong just didn't fit my team. Currently I am rocking full Serie A squad I had hybrids and all that but that league has some little beasts and some affordable beasts as well.

I HIGHLY recommend him if you are rocking Serie A squad or some sort of hybrid my dream was to have Piatek and Lewandowski as my 2 strikers but EA being EA chance of getting high rated Red picks or guaranteed are almost no existent and the amount of time I put into FIFA it would takes me to FIFA 20 by the time I get Lewandowski so ultimately I gave up on that dream. Get Piatek have fun with him!

Volleys (MEEEEEEEEEH not abusing that stuff)

Aggression (again MEEEEEEEEEEEEEH almost makes no difference in game for me)

I was really struggling with buying his card. He has 3 star weak foot, low balance and 3 star skills. But after playing 4 games with him i can already say that this is the BEST striker i have ever used. I play him in a 4222 with Ibra, Rafa and Bruno Fernandes. He scored 13 goals and assisted 3 in 4 division rivals division 2 games. Simply INSANE

Hi everyone, my first time in a revision, I'm not doing them, but this weekend I played the FutChampions with a reward tots of the series A, I had the option to choose between Correa, that I would have liked because I am Argentine and I towards illusion, also if you look at the bank you will see that I have Centurion that I love and use enough at the beginning of the game, and it would give me perfect chemistry, but I ended up opting for Piatek, beyond its 2WF, it was a bet, that for good , he helped me arrive for the first time in the year to Elite, I come to explain him because Krzysztof Piatek is a game changer.

First of all I will clear the doubt that everyone is going to have when it comes to whether or not to buy this animal of the goal, its 2 WF, and it is like that, I have to say that I miss goals made below the goal, because I have to define by left-handed, so if you do not make it easy to outline the players so they define with their skillful leg, I recommend you to try it, because you'll get an incredible fight. I did not have problems because everything he does not have in his left leg, he has it in his right leg.

Now we go with the good, which is everything, absolutely everything that remains to be said of him, I will be examining little by little, from the lowest to the highest taking into account his statistics. All these statistics that I detail here, are based on the chemistry I use, after thinking a lot, I put a motor, and I think I could not have made better decisions in this game, it makes a player agile, thinking and dribbler ... the shot is perfect, you do not need to add anything. PASS: His short pass rated at 88, is better perhaps than what his qualification indicates, in the short touch to make walls or pass and bite the hole is very fine, do not miss them, his long pass and vision you can not use as MCO, but put long passes to the pique of fast players is very easy with him, has a lot of presicion, is more I am quite impressed, to the point that I leave 9 assists in futchampions, this will make you see that it does everything very well. DRIBBLING: The short dribbles are crazy, it does not have 4 skills, but you do not need it, just making feints, or making moves with the analogics you can get rivals from above, within the area, it has short movements that are poetic, that makes it easier than the profiles for your skillful leg, once you do it, you will be facing the goal and almost certainly the rival goalkeeper will go looking for the ball from inside. Very good. His 86 in composure and 80 in balance are excellent, agility in 90, to all that you put a motor, and this guy is a god of dribbling.   PHYSICALITY: Physical perfect, all 99, jump, physical endurance, strength, took rivals like ISP Blanc, and toty VDD with his body, leaving them in fools, literal. And we are going into your 2 main statistics, and if those that I already detailed were excellent, you can not imagine the two that remain ... PACE: Not much left to say, I tried front icons, and several types of DC, Piatek is the fastest I've tried, it does not have full rhythm statistics, but nevertheless in the gameplay, it seems even faster than what its statistics indicate, once you go hand to hand versus the goalkeeper, no defender could reach it, which makes you can send passes to empty to leave it hand to hand, stay calm that will reach that ball and finish the play in goal.

SHOTTING: Here we have its most fundamental quality, what distinguishes it, and for me it puts it among the 10 best scorers in the game, the first, his long shot, his stats indicate 87, and do not lie, match locked, goalless, difficult opponent to enter, leaves the area and hits a goal from outside by opening his foot to the angle of the goal, his long shot is excellent. What is pulling inside the area, I do not have much to say, just try it, I never felt this way with any forward, in the matches of the future I felt that when I was in front of the goal, and was about to shoot, that ball would end up getting Anyway, I had that feeling, which also fills you with confidence, and allows a much more fluid game to one. The only thing that seems to be half loose, is his 64 volleys, they do not feel that way, they are not his forte, obviously, but dare to try, and you will see that they are pretty good.

I want to mark as last, their headlines, 99 jump 99 HA, nothing to say, only when it is to nod, think about the celebration you will haha, has won head players like David Luiz FB and VDD tots.

Well, I'm ending my first review, thanking all those who have taken a bit of time to read it, do not hesitate to buy Piatek, beyond his bad leg and his 3 skills. Try it, try it, and then go through this review to thank me haha

Excuse me for my English, I'm Argentine, and it was a bit difficult, I hope you understand most of the review.

I got my first Elite on fifa 19 and I owe it to this man. At least I had to make this report, I send them a hug and I hope you liked it.

Volleys I could have better volleys, they are not so good.

I got him in my Serie A guaranteed and have used him off chem (5) as I’m running League one and used my coins on Aouar and couldn’t afford a decent option that would fit. He is very close to being a sensational player but two things really hold this card back his weak foot and aggression.

2 star WF is really bad – it’s so bad that when I was trying to complete weekly objectives in squad battles he was getting shots saved by a 50rated RB playing in nets when through 1 on 1, it’s basically unusable, do not shoot ever on his left. The only positive I would say here is that as not many people are using Piatek opponents don’t know how bad his left is so he’s not as predictable as he could be.  Also as you are never tempted to use the left as you would be with a 3star WF you just figure out tactics to always get him on his right but it is a limitation

Aggression is the other big issue, he has amazing physical stats on paper and great heading, jumping but the 44 aggression does effect this. Any free headers he scores, if you pick him out then its in every time but he doesn’t challenge for headers as much due to the aggression so Benzema, Cavani are much more of an aerial threat than him despite his other physicals same for goal kicks

On to the positives – his right foot is sensational hes pretty much maxed out on finishing stats and on his right side he’s excellent in the box, has scored me some amazing goals, he’s useless at finesse and volleys but I don’t volley anyway but first time which is OP anyway he is brilliant at

Passing, his stats look bad but vision is more for long passes – I have engine on him and SP goes to 93 and he gets a lot of assists with midfielders, wingers going past him

Back to goal – once he has it, he’s good at holding players off and with 96 agility and 90 balance and 95 control he moves well and can turn away from defenders – with 93 pace the fake shot is really good with him. Despite rubbish aggression the balance, reactions and strength do make him hard to knock off the ball

With a weak foot and some aggression he would be absolutely brilliant but those two things let this card down for me, he’s untradeable for me so ill use him as a super sub but hes definitely not a starter