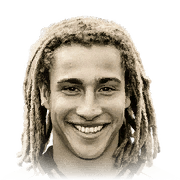 I was very hesitant to do the sbc for Larsson cause to me, thats alot of money for a single player. I can safely say that i do not regret it for one second. What a player!

I had trouble finding a good striker in EPL to partner up with Salah, i tried pretty much everyone but they all had their cons. When Larsson finally came he stole the show as expected. I would say hes great at everything and a real master of shooting. If youre in a shooting situation you can put your trust in this guy. His finesse shot is perfect because of the trait, even better than Salahs, but he also masters all other types of shots. Keep in mind that my experience from him is with marksman as chemistry style though. What differs him from the best icons in the game imo is that as i previously said he is great at everything and master of shooting, while the best icons obviously master all types of stats. Keep in mind that with his 92 jumping and 96 heading accuracy he also scores a lot of headers if you feed him crosses, despite being far from the tallest striker ive used. Hes the one i bring to near post on defending and attacking corners.

If youre in doubt about this guy i would definitely go for it!

The definition of a complete striker. Great at absolutely everything except defending.

Decided to pick this guy from the icon SBC, completed for about 800k, and worth every single penny. Best player I have used thus far into fifa. Has everything, pace, heading, shooting, always in the right positions, and the 4 star weakfoot is amazing. Can`t recommend getting this guy enough. 30 games, 68 goals, 4 assists all in division 4.

Honestly I never planed to try him out but when EA released the Zlatan Flashback-SBC I more or less had to because of the green link to God.

I wasn´t expecting a lot from him especially after using CR7 as striker for the last three weeks but he totaly surprised me! His positioning, heading and finishing is insane. His headers and jumping are on the same level with the normal gold card from CR7 and even his finishing is very close to Cristiano Ronaldo. His high jumping stat makes it possible to win nearly every header even against players like van Dijk or Ramos so I can promisse he doesn´t feel like 1.78 m more like 1,85 m.

His strenght seemed to be his biggest weakness to me but his agility and acceleratin can easily compensate that. Most of the time you don´t even need strenght witz this card beacuse of his postioning. He usually stays perfect to score without any chance for the opponents defender to get into the tackle and when you don´t have to face tackles you obviously can´t lose them...

Just to mention it: his passes are good for a striker but i wouldn´t play him in midfield.

In conclusion I can say that he is worth every coin up to 1,5 Mio. Especially when you´re playing with a lot of crosses and/ or looking for a good link for Ibra he won´t disappoint you!