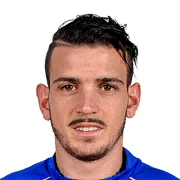 He is such a beast defender. Forget his height, it doesn’t matter.

I really enjoyed to play with him. He is fast, he can reach every player in speed duels and all his tackles are awesome for the reason he plays so aggressive.

His stamina is a dream, perfect for using him in the attack, in the defense or between those areas.

A well rounded passing, amazing dribbling for a defender and a good shooting makes Florenzi to one of the best right backs in the game, for sure!

This tiny man owns the whole right side of my squad: with his 96 pace he can catch up to any winger he faces. once he does that, you'll find him running forward on offense like a proper winger to receive a pass from midfield, drive forward and either deliver a pass or take a shot. then he flies back on defense. rinse and repeat. easily for 90 minutes, sometimes for 120 thanks to his 90 stamina. he costs as little as a candy, he barely has 3 stats above 90, just one under 70. he can dribble very well with his short frame, agility and 4*. he has very decent passing stats, can shoot pretty dang well for a fullback and has decent interceptions that goes very well with such a rapid player. to have all that, you pay by having a short player, not particulary strong but aggressive enough, and not that amazing in defense as you may want. to me that i play with a narrow formation and thus need offensive fullbacks, this guy is perfect when you take into account the fact that he costs nothing. very cheap, very effective.

1) 87 volleys. not really related to shooting, but to crossing. he's got 7 assists for me in 18 games, which is not amazing but definitely not bad. well, a couple of those went like this: ucl allan with powerhouse launching him with a chipped long throughball, then this man decides to volley the cross in for my left striker who is mertens the giant who tapped a header. this happened twice in 18 games.

2) 4* skills. i really just use 4 skills that require 4+*SM: la croqueta, ronaldo chop, berba spin, the faster berba spin whose name i can't remember. he's able to do all of these and thus dribble almost like a proper RW, which is nice since he attacks a lot.

3) shooting inside the box. he has got 2 goals in 18 games, again not amazing not bad. both of those goal came from inside the box, just simple far post power shots from a reasonable angle. i'm decent at time finishing and i was able to hit them both green and they went in with pretty decent power. he had 2 chances like that and he buried 2 of them in, pretty solid i guess

Overall, he's very good as an offensive fullback, heck i believe that he could play RM/CM with engine/artist chem style respectively. however, if you play a 4-3-3 variant or 4-2-3-1 you may want a more defensive fullback so i advice you to stay away from florenzi, 1 because you waste his shooting and dribbling by putting him on stay back, 2 because he does not have amazing defensive stats or height or strength. 9/10 globally just because there is a separate voice for "value for money" which is straight 10/10

At the beginning, I really want to note that this reviews refers only to the card in FIFA, so please Alessandro do not be mad at me.

As it may be expected after first sentence the overall rating won't be the greatest. Florenzi is a huge disappointment, because I would rather expect at least good RB. Unfortunately, he ended up on my transfer list with my big relieve.

I will describe all of his stats one by one or rather I will criticize or even slate his pathetic play. Starting with pace, which is quite good. 84 should be enough, albeit the further problems make this stat not that sufficient.

On the other hand, shooting is definitely his strong side, due to fact that he shots really well. However, such a ability is nearly useless. Of course, it is a nice addition to any full back, but make no sense when this is the best attribute. Therefore, Florenzi shots very well, but there won't be many occasions to check it, since he struggles with helpful attacks on down the wing.

Now it comes to rate passing of this "Italiano". Again, it is decent and it gives a lot of potential opportunities, but in fact, that is just slightly more useful than his shooting. Because of his problems with wise attacking it is difficult to take advantage of his great crosses. It is needed to mark, that you can get out from the pressing quite easily, although it should be a pleasant supplement of complete RB, not his best trait.

Raising a subject of dribbling things are going to worsen. In contradiction to stats, his dribbling is only average. He feels comfortable with the ball, which is decent, however it does not make the big difference in terms of attacking.

I should describe the most important stats to defenders which are defending and physicality and dear! That is pure "creme de la creme" of misery he could easily provide. Playing with Florenzi during the WL is a worse experience than colonoscopy. Because in both situation you get your anus ripped out by a lean thing that could goes anywhere. I hope that it illustrates the play of this parodist. He is awful. He really cannot defend at all. Sometimes he did manage to win a ball and then pass it properly, but most of the time he is somewhere. Rarely is he on required position or even near to the right side of the defense. It is nice that he has 90 stamina, but if he did not, he would have been send off after his ridiculous marathon around the whole pitch. Adding up, Italian is so week and so lean that he struggles to push Insigne.

Summing up this doubtfully pleasant experience, don't be fooled by his stats which are really good. However, the defender should defend and trying to avoid loosing 5 goal every match. Take anyone else, Cancelo is far better, or even when the Roma player is needed choose Karsdorp.

-Total lack of any physics

-Positioning from another world

-Despite of good offensive stats, he is not able to help in scoring goals

-Game changer to benefit your opponent