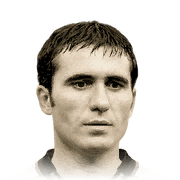 When i bought Hagi it was after first week of WL of Fifa 19, i wanted Figo 88 version but it was 250k more and i couldn't afford him and i needed a CAM icon. i thought i'm gona use him for 1 or 2 weeks untill i make the coins for an upgrade but i still have him now and i don't want to sell it anytime soon.

if you look at Ronaldinho (89 CAM version that i have the coins right now to buy it and i really wanted him),Hagi have same or better stats than him. the only worse stat Hagi have it's the physicality.

The 94 shot power it saved me so many times in WL, long shots from outside the box ( normal not timed) 9/10 goes in.

FInishing, inside the box always a goal

It gets bullied off ball pretty easy

This review talks about if you can still use Hagi after the finesse shot Patch, And the ANSWER IS YES!!!

even with the finesse shots being useless now, this guy is a monster: TIP: one-two passes make this guy 10x better, also take a driven shot power or just shot power near post 3-4 Bars, and 85% of the time it goes in. MUST PLAY HIM WITH HUNTER.

As a game changer he is very good, but sometimes he wont show up, but its rare.

for his Prime being 150k or 200K more, its worth it. As its like 4 card Stats more which is nothing

Passing- This guy has got good short passing and long passing, His through balls are perfect every time, same as his over the top through ball

Stamina- Is Ok, if you play 3 games he will start from 99 FITNESS TO 81 AFTER 3 GAMES. You really dont have to sub him off for the first

-PHYSICAL- Weak, the only thing i dislike about the card, he will 8/10 times get pushed of the ball

-He will win barely any headers, he is a tad short