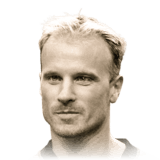 As in my headline written he feels like a faster Pogba with another brilliant advantage if it comes to score goals.

I use Hunter, to make him able to outrun the most of the defenders as a second striker.

If you think his passing looks average, believe me its so good even without a chem style to boost it.

Its surely because of his great vision and composure.

If you just wanna play him as a CAM I guess Sniper is perfect for him.

So what's makes this card so good in value of coins for an Icon?

In summary it can be said that he is absolutely worth the coins and the best ICON CAM who can be used as a ST in this price range!

Maybe there are cheaper options for CAM (Reus, de Bruyne...) on the market who are as good as he is or even better but no way there is a better Icon in this price range!

Hello, I recently picked up this card for about 117K. I can tell you something right now though he is 100% worth it! I bought him initially planning to play him as a striker with a hunter. I then decided to go for a hawk and play him as a CAM. He was mental and his dribbling is so swift. His shooting is incredible and his finesse is fantastic. The long balls he plays are phenomenal as well as his shot power. He is definitely worth every penny you pay for him, at this stage in the game some people might think it isn't good because of the meta. He fits the meta though. I am really happy with his card as his goal to game ratio and his assist to game ratio were fantastic. I missed out on his icon swaps because I chose Laudrup and the prime icon pack. It isn't bad if you didn't pick up the moments card because these ones are still great! I am definitely going to upgrade to his 90 mid icon soon and I will leave you guys a review there. Now I will talk about some pros and some cons to the Iceman.

His shot power is insane. His finishing. Penalties. The pass strength and vision. Dribbling is very swift and he is untouchable on the ball. His balance and agility are surprisingly good.

I didn't really find any major cons to him. He could slightly have improved pace and his balance and agility could be improved by a little bit.