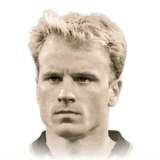 Firstly I most confess on something: I'm an Arsenal fan. Since this day, Dennis Bergkamp is my favourite player of all time.

Becasue he's my favourite player, I started to play FUT way back in FIFA12, for the hope that one day he will be back on the game. On FIFA 18 my wishes came true: He's here! but oh sh*t! He's too expensive! I could never efford the Prime version of this card!

Luckily, in FIFA20 it's so easy to make Coins, so everyone can efford at least 3 Top-Tier Icons in their teams.

My squad is in the URL up top: I open with 4-1-2-1-2(2) with Dennis on the CAM position. For me he's the best CAM on the game and one of the best players I have ever played with.

Let's get right to it:

DENNIS BERGKAMP DOES NOT HAVE CONS. PERIOD.

If you want to have fun on the game with good player you most chose him. He's actually bater in game more then his great stats. COYG!

When I got my first 9 tokens from icon swaps I knew I was doing the Prime Pack. To my surprise it wasn't Inzaghi and instead was Bergkamp. Despite the low agility/balance, I put a hunter on him and played him up front alongside Mbappe. With 19 goals and 2 assists in 11 fut champs games he is one of the. best forwards in the game. He has exceptional dribbling and shooting and is a real a menace for defences