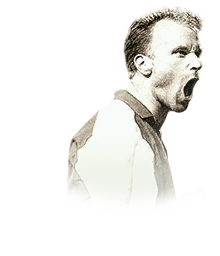 Decided to give Bergkamp a go. And boy, happy I took that decision. He feels really smooth and scores every shot on goal. Left or right, doesn't matter. His compsure is 99 and has got fairly decent agility and balance. It makes him sturdy. I know for sure he won't leave my team ever again.

Cant think of any.

Ok so this is a review for Dennis Bergkamp mainly as a CAM but also as a ST. He is sensational, far better than Rush and probably better than Kenny. I would like to seriously point out the as long as you either have him as a stay forward CAM or a get in behind ST then his work rates are completely unnoticeable. Btw I use him in div 3 and only play up to gold 3 because this game is awful ( I went 14-6 this week)

Perfect shooting - Left foot finesse shots are as good if not better than his right foot finesse. Pretty much has a 5* weak foot.

Really good passing range allows him to rack up the assists as well.

Dribbling! He is so good to dribble with, literally like him in real life, he can turn and spin so neatly and his agility is NOT A PROBLEM.

In game build makes him stronger than his stats seem

I don't have any big cons at all to be honest!

I hope i can help you make a right choice. I play him 10 games, he scored 10 goals, and make 6 assists. I use him at ST win 4-3-2-1 with engine chemistry style. And now short review. Of course, the M / M workrate is felt even when instructed to stand in front, but thanks to the attacking position 99, in the final phases of the attack, he was in the right place. He score a lot of goal with left foot( it fells like 4.5 star), his finess shots are powerfull. Also he can He pushes well, calmly pushed Lenglet for example.His passing also pretty good. And now key phrase! I understand better to use it in schemes where there are some ST, as a single ST he is bad, better choose Dalglish or Rush if you want to single ST