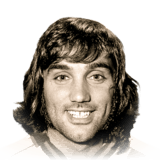 George Best; the lad from Belfast; the celebrity ICON; the long lost member of the Beatles.  Ever since I picked up a copy of George Best’s autobiography ‘Scoring at Halftime’ this summer, it has grown my appreciation of this star who burnt out too soon.  Having used some top ICONs lately I was interested in how a card like 90 rated Georgie Best would stack up.  I am still steadfast in my use of the 4-2-3-1 and with Martial in the ST position I had to decide which of the three CAM positions to deploy the Northern Ireland talisman.  In the end, the central CAM position won out for a variety of reasons, and in response to this, I used the CATALYST chemistry style throughout the weekend.  It is no doubt that Best benefitted from the increase of pace, but even more so from the passing boost as he picked out teammates and ran up his assist tally throughout the weekend.  George Best helped my team ‘Come Together’ in the following squad: 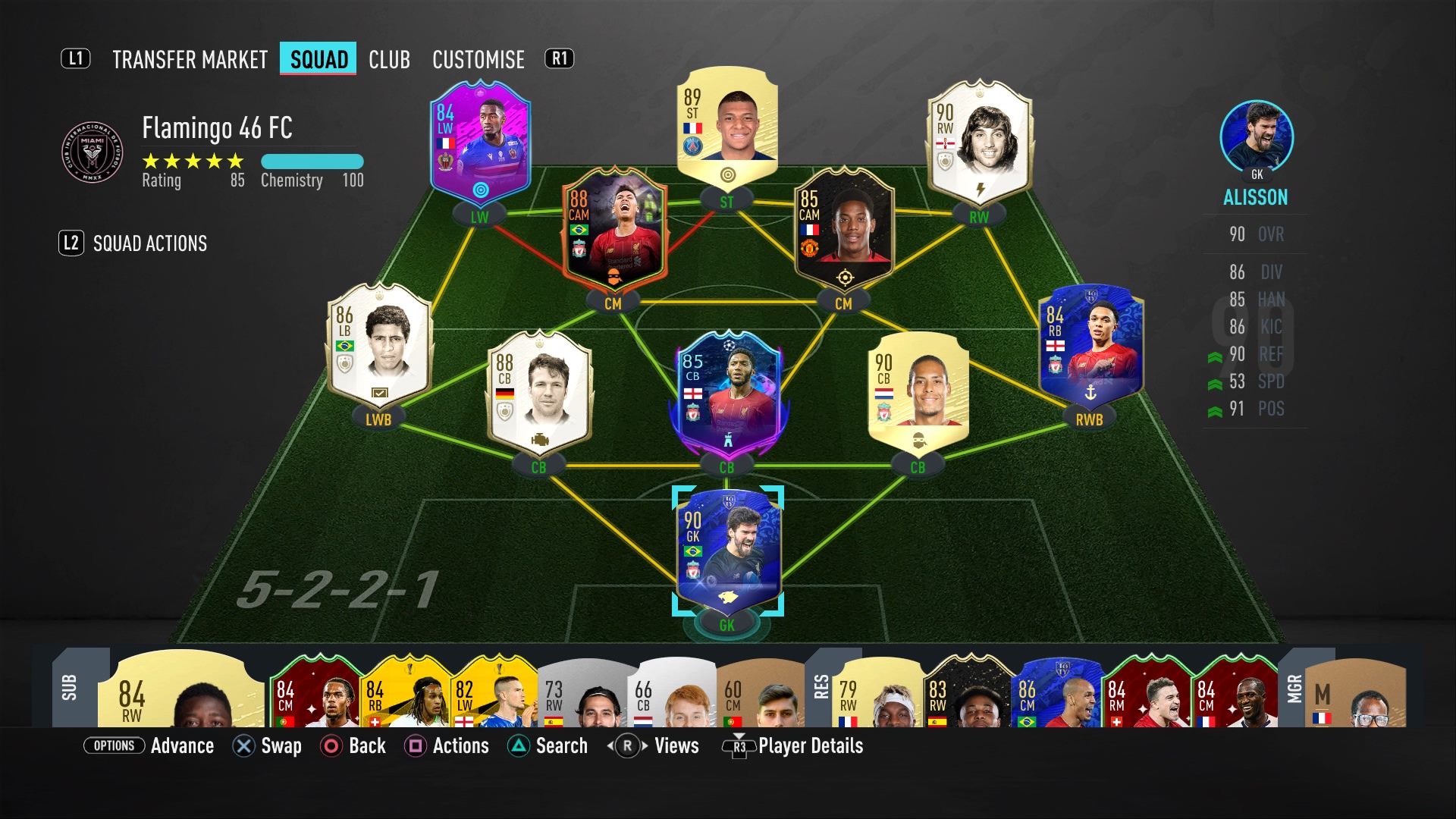 This card is one of the most well-rounded attacking players I have used in FIFA, and even better he has some stand out statistics making him a potent and reliable option.  The pace … you can inject George Best’s pace right into my veins.  What a weapon this card is when you get him in the right spaces.  99 ACCELERATION & 99 SPRINT SPEED with CATALYST was no joke and this card has that pull away pace in the midfield.  As a creator, this gave me the extra second to pick the right passes, as a goal scorer it allows you the extra touch to make the perfect angles.  If I had deployed Best as a ST I would have probably gone for the HUNTER chemistry style or even MARKSMAN for the added shooting boost for sure.  While Best was clinical enough for a CAM, I did miss a few ‘should be goal’ opportunities that I would like back from the weekend.

As an ICON Best is quite easy to fit into any squad, obviously the Northern Ireland options available are not making it into your Weekend League squads, and if he was a centrally positioned card it would be easier.
This category is getting more and more tricky by the minute.  At what point is really good no longer a 5/5 and starting to fall into the 4.5/5 category?  For now, I think that this card is right up there as a useable and effective option.  FIFA 20 requires pace, quick turning, skills, and of course the ability to find the back of the net.  Best checks all of these boxes and then some. I was overly impressed with the dribbling you can pull off at pace especially and was a key to my success this weekend.  91 AGILITY & 88 BALANCE as base statistics is a perfect combination, 4 STAR SKILLS is handy, and then if and when you are tackled … 68 STRENGTH was sneaky strong.  Best bounces off of a lot of tackles he shouldn’t and showed a great deal of power in the midfield that I was not expecting.

860k is a fair amount to pay for any player and so we have to be certain they will deliver the goods.  A quick look at PRIME Best (2.5 million) is a good starting place.  If you look at the statistical differences it is not a huge gap, but the price tag is.  I honestly believe that Middle Best has been overlooked for other options and has therefore fallen into a nice price point for what you are getting.

I have been sat here for 15 minutes trying to pick out what I didn’t like about Best in order to offer a realistic review of what Best will bring to any squad.  I still have nothing.  He is just about perfect.  Really, all I can say is that I wish he was better in every category … what I mean is, who doesn’t want more pace, a harder shot, more accurate passing?  But the result is Prime Best and an inflated price tag.  So, in reality this card has it all and maintains a more affordable cost.  What is not to like about that?

20 games – 19 goals from the CAM position.  It was fantastic how frequent Best would pop up into the right positions and then take his chances with clinical ease.  The positioning on this card is phenomenal and he always seems to know where to be.  Additionally, I enjoyed that he has the pace, strength, and dribbling to create his own goals from the midfield as well. But then you add the assists; 15 more contributions to the squad.  The passing was the highlight for me as Best found channels and weight of pass that I was not expecting time and time again.  If you haven’t caught on, I will go ahead and say it. You need to get your hands on this card and give him at least one Weekend League in your squad.  He delivers on the biggest stage, just as he did throughout his fantastic career.  If anything, just get him for the flowing locks in game, it is a joy to watch. Cheers for reading. 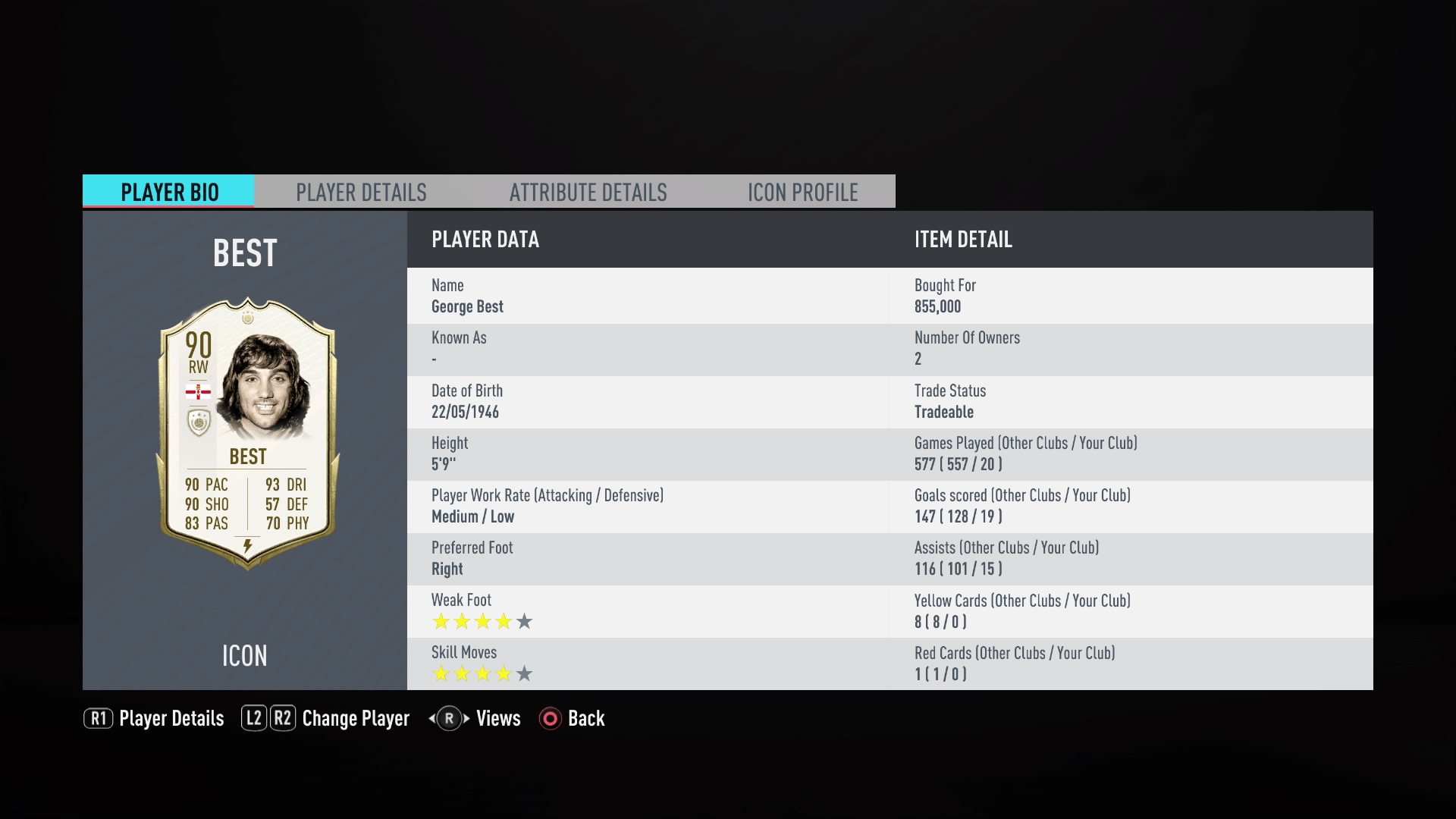 So were do we start. He is an absoloute beast at the st position. I`ve used him for 80games next to Mbappe at my right striker role (see the link to the squad, its the ingame formation).

He scored about 80goal and made 33 assists. For me he was better then mbappe, when you are not a skiller. He`s shooting is insane and he dribbles past defenders with eas.

When u have the coins and will test something new buy him, he`s defnitly worth it.

-Shooting inside & outside the box, especially finesse shots at the near post

-Dribbling, so fast on the ball and turns really quick

-Passing, he`s passing stats are really god an ingame the longpasses are insane

-Pace, because he`s so fast and has good dribbling he`s so fast in the game (with an Hawk or Hunter chem style superb)

-the only issue this card maybe will have is his strength, but for me it wasn`t necessary because he turns so quick you will get out of the way for battles with defenders

-stamina could be better, sub him off in extra time mostly

Hi guys.It`s my review on George Best.If you think to buy it,you should do it.Why?First of all his amazing pace.I used him with hunter chemistry stile and 99 pace s true..Secondly shooting.he has clinical finishing and your opponent can break his controller after another Best`s goal.And don`t forget about his dribbling.Agility and balance of this gentleman are incredible.You can watch Best`s goal by Curt in Youtube.I used him as left ST in 4-2-2-2 but I think he is good ST in 4-2-3-1 too.Left foot isn`t weak.He can score unbelievable goals using left foot.Height is OK.Heading accuracy is very well and he easily scores goals by corner. Oh, his passing.Of course,it isn`t perfect but short passing isn`t 76 in game.Long passes are very fine.I`ll use him for a long time,I`m sure.

This might be my favourite player in fut 20 yet, so I decided to write a review going over all of his stats, Enjoy!

He's rapid, this man is perfect for through balls. He also actually outruns defenders which is rare for a lot of attackers.

The combination of pace, shooting and dribbling is what makes Best so god damn good. His finesse shots are amazing and hes hoots from anywhere. He even scored a banging volley from outside the box. More importantly however he can finish normal chances 19/20 times. This mans consistency is out of this world.

Since I play Best up top with butra he doesn't pass much, but whenever he needs to send in a cross or a through ball he always pulls through. Not really much to say here, just don't attempt crazy passes with him.

Wow, Best is the best dribbler I have ever used in fifa. I don't really skill since i'm not good at it, but Best is out of this world. He is so smooth when he dribbles even in terrible gameplay. It's like he has a forcefield around him.

If i'm being honest, Best is pretty weak, but that's kinda obvious. This is luckily not a problem since he's supreme dribbling and pace will leave defenders in the dust.

Nothing else he is insane