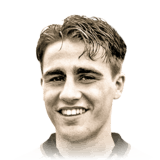 The 87 Cannavaro is one of the most elite centre backs on the game with his lighting pace and great defending. You may be thinking he doesn't have the height to play CB but as heading is not the meta this year so less tall forwards are being used, also the 95 jumping he has means he is still able to win some headers even though he is 5'9. This card is also one of the quickest players on this game with his lateral movement when joking, the 82 pace means this card can catch after nearly very stricter. He is also one of the quickest defenders on the turn with 86 agility and 81 balance partnered with being 5'9 and a lower centre of gravity means he is one of the silkiest and more reliable defenders out there. On to the defending now where he has got 90 defence awareness so you feel he is always in the right place and also 91 interceptions so the oppositions midfielders struggle to slip the ball through to there forwards. You may also be thinking he doesn't have enough strength, but 83 strength and 77 aggression means he is strong enough going into the tackle but also might lose a tackle every couple of games. I would suggest buying this card and at least trying him out for a weekend league i guarantee you wont be disappointed because of his electric pace and great all round defending.