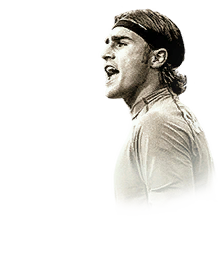 As soon as i saw the Icon Swaps season 3, I was not sure whether I should go for the Prime Icon pack or a player. But when I saw Cannavaro, combined with all the trash players my friends had in the Prime Icon pack, I decided to go with Cannavaro. Of course it takes a bit of time to get the 20 tokens for him. But I can tell you, he's absolutely worth it.

I started him in the last Weekend League, which was the sweatiest one so far this Fifa (PL TOTS rewards coming). He played 19 games for me, stopping at gold 2. I did not have the time, to do the whole of 30 games.

Because of his body type, he feels very fast for a centerback. He turns quick as well as the fast strikers in this game. With him in my defense, I was never worried, even when there was someone like Adama Traore right around the corner.

Why should I rate a centerbacks shooting? Pointless in my opinion.

His passing is pretty good, it feels better than the stats show. But he will not be a guy in passing like Van Dijk Toty. But all in all it's great.

Of course he is not as good as Messi or the likes of Neymar when it comes to dribbling. But for a centerback he feels very agile on and off the ball. Combined with his high balance it's very accurate. He turns very quick and so he's very effective against fast and agile wingers or attackers.

He saved my arse so many times in this weekend league. He only produced 1 mistake in 19 games, tackling at the wrong time so my opponnent got a penalty. But to be honest it was my lack of bad defending in this situation. His tackling is really outstanding, always on point. Also he is very good at interceptions. He has stopped my opponents by an interception very often, so I was able to start a fast counter attack.

First of all I was worried about this because of his height, but after a few games i recognized there is no issue with that at all. He feels very strong as well as aggressive when it comes to 50/50's. There was not one striker in this WL, he couldn't get the ball from. And yes, i played against the likes of Eusebio, Mbappe, Lewandowski Headliner and even Gullit to name a few. It was surprisingly awesome, really !

And btw, there was no issue with his stamina at all.

He is the best CB I used this year, and I'm not regretting the time I spent to get this card. If you have the time and nerves to get him, do it. He will not disappoint you !

Has hair in gameplay, looks like an old roman emperor ?

I can not see any in case of a defender.

I went for Cannavaro in Icon swaps. I wanted an end game CB and that is what I hoped Cannavaro would be.

At first I was a bit worried about his height and passing abilities. However, his height is not a problem at all. His passing can be questionable though. But you’ll notice that it isn’t that bad and basically similiar to most other center backs.

When it comes to defending he really is amazing and rock solid. His defensive awareness and positioning is just crazy good!

His pace and physical is also really good. His dribbling is okay. He turns quite quickly, which is good against the Ben Yedders and Neymars that you play against almost every game.

Final verdict: I definitely don’t regret getting Cannavaro from Swaps. He offers everything you need for a top tier defender.

Like every other Thursday, I was opening my DR rewards and expected some 82 rated players, like always. My last pack, premium jumbo gold pack... But then, I was little confused, as I saw white flares and I was asking myself if that really is an icon. Italian...CB....and then, this god comes out and points at his card as I jumped out of my chair and constantly said "Cože?" (which means "What?" in Czech) So I put him in my team and after 389 appearences, I have to admit that Fabio saved my ass maybe like 389 times? Honestly, one of the best players I´ve ever used. He can do everything (except finishing but who cares).

So, how is he that good?

Sliding tackles: One of the many things, that makes Fabio priceless. He can get any ball that is going against him. No matter how strong, agile, or fast the opponent is. He gets the ball and creates a counter-attack that leads to a goal. This is the reason why he has 51 assists.

Great playmaker: Yes, this defender, that has 65 passing and 70 dribbling, is a great playmaker in the game. As I said, he can easily get the ball from the opponent and do some 5-star through balls to the front. Also, that dribbling stats are a lie. He gets past 3-4 players very often, feels very agile on the ball.

At the right place at the right time: Imagine this: 1v1 vs your keeper, your defence is nowhere to be seen. Opponent dribbles past your goalkeeper, shoots to an open net and you are about to throw your controller out of the window... But there he is, some how, some way, Fabio ran 30 meters in like 3 seconds and blocks the shot. This happened like 15 times to me. No other defender I tried did the same.

Pace: Pace on the defenders, especially this year, is very important and Fabio is fast as Sonic the Hedgehog on crack. With anchor, he is at 91 pace and he can catch up someone like Kent, Traoré, or any other fast players.

Maybe shooting a little... but I don´t think you´ll play him as a striker