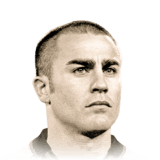 As a player I consider my main weakness to be defending, I've never really been a great defender across any FIFA hence why I really wanted to bring in a top tier defender to help me out. When Cannavaro runs out in his first game for you, the first thing you'll notice is he's tiny, standing at just 176cm or 5'9" in the old money. As I mentioned earlier however, this really just isn't a problem as heading is dead and regardless he boasts 92 Jumping and 90 Heading Accuracy can outhead most players. I was actually surprised to find the driven near post strategy at corners works quite well with him - while not scoring yet - he has managed to get a number of headers on target and caused a couple of GK spills that have led to goals. Despite his diminutive stature for a CB he boasts a nuggety strong looking model, weighing 74kg and has 87 Strength.

As primarily a 3ATB user I find that pace is quite important to provide cover to the point that I usually play a pacey RB at RCB for chemistry reasons but also to provide cover out wide. On the face of it Cannavaro has good pace with and 80 PAC face stat but a closer look shows he has 84 Acceleration and 77 Sprint speed. I applied a Shadow chem style to him so he has 99 Acceleration and 87 Sprint Speed, as per his stats Cannavaro displays absolutely explosive acceleration - particularly when jockeying - unlike any other defender I've used. In addition he has great Balance, so where other taller defenders will sometimes stumble and fall over in the challenge, he will stay firmly upright. Where his pace may let you down is when you're caught unawares by a sneaky through ball, you're 99 paced (with chem) Cruyff's and Mbappe's etc. will be kept up with but due to his size and strength they might still manage to get a shot away.

Now, to his actual defending, I will say he is the cleanest most clinical defender I've used this year and perhaps in any FIFA. Any loose pass in his area will be slurped up and recycled with ease, even though on paper he doesn't have the best Ball Control or Dribbling stats those interceptions certainly stick to his feet like glue. His defensive cleanliness isn't limited to interceptions with his Tackling being certified GodTier. Not only will he win most tackles but if you miss-time the tackle, he's so explosive and agile you'll generally get a second bite at the cherry to win the ball back almost instantly. None of those humongous slow lunges of Pique and VVD and the like, he just sticks his foot out and nabs the ball. He very rarely gives away a foul and only had 1 yellow card in 28 games for me. Those 91 Reactions also prove handy in those 50/50 situations and prevent the ball bouncing back to the attacker (looking at you Rashford).

Dribbling is not really something I expect my CB to do too much of but for the basics he is fine, he can trap a driven pass and move it on without too much trouble, just don't be expecting any coast-to-coast skill runs. One of the slightly disappointing aspects of the card is his passing, it can be quite bad, so I've learnt to keep it simple and recycle the ball out from the back via better passers. So long as you keep it simple, it is fine however, it's just compared to Pique and the like it is a little disappointing.

So, how did he perform for me on the whole. I played 28 games with him, 13 in the weekend league, with the rest being in Rivals (plus 2 SB games for objs). I ended up 14-7 in the WL (I generally stop at G3), from the 28 games he has played for me I've only lost 3 games which is a massive short term improvement for me. He has slowed the leaking at the back almost single-handedly. I've also noticed the rate of rage quits going up, it's almost like after I go 2-3 up that my opponent feels helpless to try and get past him.

Is he worth the coins? IMHO when you consider the cost of other top tier icon defenders I think he offers exceptional value. However, when you consider you can get VVD/Varane/Ramos etc. for a fraction of the price it's tough to justify. But I will justify it like this, he offers an exceptional mix of stats (Pace/Defending/Physical/Agility etc.) and fits the meta so well it truly makes him worth it.

I picked up cannavaro 92 when his price was low before TOTY hit thinking i could use him for a weekend league and replace him at a profit but after 40 matches he has proven to be my best centre back, Paired with 90 David Luiz he has been nothing short of brilliant, he stops everyone the best way to deal with skillers = cannavarro the most consistent defender i have used in years on fifa and i have used the likes of mid maldini, 90 david luiz, laurent blanc, even i think as good as the toty defenders due to his size and ability to move quickly to intercept unexpected player movements and he is just allways where you need him to be to pick up an easy tackle ruin their attack and let you turn the play.

Defending all aspects in fifa 20 he is perfect

I got this version of Cannavaro because whenever I play against him he always performs amazingly against me and I thought he would be a good pairing to flashback boateng. It turned out to be a very good decision. I put a shadow on him because I thought his strength was good enough and it was. He might be the fastest defender on the game and definitely is the best cb on bad gameplay. The only issue are the reason why I do not think he is the best cb on the game and that issue is his passing which is a very annoying one. I never feel safe to pass the ball long with him as the ball could easily go to the opposition. Apart from that, I could not recommend him enough as he is a very fun cb to use.

He fights for the team