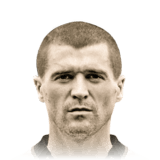 Absolute fucking machine. I played Roy Keane in a 433 in LCM with Maestro and he is insane. Currently in Div 4. Defending is second to none and surprisingly his dribbling is quite nice. Shooting is disgusting do not expect anything from it BUT oh man oh man the dude can PASS.

Defending and Physical maaaaate shut the floodgates. Dude is so so strong, will never be pushed off the ball. He can win most headers in the midfield and when you set his interceptions to aggresive he will always win the ball back for you in the midfield.

Keano's passing is very sexy with the Maestro chem style and with a pacey attack and long ball tactics he is able to pierce the opposition midfield and backline with a through ball.

I was very surprised with his dribbling. It's not quite Sancho level but it is enough.

Shooting: Don't bother, it's not what his there for and you won't need him to shoot very often.

Pace: Look its not that terrible but when your chasing some of the faster players in the game he will struggle to keep up.