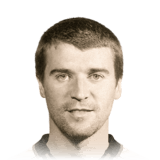 Being Irish and a United fan doing Keanes icon swap was a no brainer. So after around 50 games what I can say he really controls the middle of the park with his positioning and his passing, the best of any midfielder I've used so far, as good as the likes of Pirlo who I've used in a few drafts.

His tackling and aggression are noticeably true to his stats, but be of mind that he does get outmuscled by the likes of Fabinho and Sissoko in 50/50s, don't expect him to be a beast. That said he does win a lot of ball, mainly because he is one of those CDMs that is always is in the right place at the right time hunting down CAMs and covering for over committed fullbacks.

His dribbling is extremely workable and mixed in with an impeccable first touch and laser passing he will rarely lose the ball if you play him right. I used Fabinho for a while and found him a little bit sluggish with the ball by comparison, Keane is much closer to the likes of Allan, though not quite so nimble. His pace isn't too bad, he feels faster than the stats suggest but I would definitely recommend to put a shadow on him. I would say he feels like exactly 85 pace with shadow and in around 77 without.

The best thing about him is his passing is insane, he has cropped up with plenty of assists for a CDM, played some amazing 40 yd defence splitting through balls and lofted balls over the top, I've not used a player who can equally pass and defend as good as Keano. The other great thing about this card is his stamina, even at the end of the game when he's tiring he doesn't feel much different and is still tirelessly chasing down attackers and taking great touches.

His shooting is not great, I took a few shots with him and they all hit the target but the keeper easily saved.

Finally I would say one thing to like about this card is he feels exactly like his real life counterpart, tidy in possession, great touch, great passing and puts in great tackles. He's not going to be the best CDM in the game, he's not godlike, but he's extremely good hence the 4.5/ 5. He does everything I pretty much want from a CDM, if he was a bit faster he might be 5/5, but then sometimes fast CDMs tend to overrun the ball and Keane feels very controlled and will suit players who like build up play.

Can be outmuscled by larger midfielders

In my squad, I needed an Icon to slot in to the box-to-box midfield role, whether it be an attacking style CDM in a 4-2-3-1, a RCM in the 4-1-2-1-2(2) or a box to box CM in the 3-5-2. The two options presented by EA in the form of Icon swaps were 89 Gerard, or 90 Keane. During the first season of Icon Swaps, I picked up 88 Nesta (who now isn't needed in my team, or the preferred choice over 25k CB options) so my options were further limited. If I'm being totally honest, I'm not sure that Gerard could possibly be better than Keane, aside from his pace. I've made an odd decision in the chemistry style I've used on Roy Keane, applying a Deadeye for more precise short passing, better long passing through the vision stat and most importantly +15 finishing and + 10 on an abysmal 65 shot power stat. This allows him to finish chances in and around the box, which my 86 IF Wijnaldum, who previously played the same role in my side, often struggled to. After using this chemistry style I see no reason to change, he moves quickly over short distances, makes strong tackles, and has the strength and aggression to hold his position in midfield. I highly doubt I will be changing him out until TOTS unless some insane content gets dropped. I highly recommend this card for the 15 Token price point over any other option if you need a box to box midfielder. I'm certain he would be a crazy CDM with the right chem style, either a shadow or engine most likely.

Ssup guys! Probably i write this review too early but i suppose to think that i played enough games with Keane to write it. I'll try to do it short. I needed someone on cdm to close this position and help me to improve my hybrid squad. Keane is the best option for center of the squad. He is fast enough for cdm, he is very strong and the most needed thing is that he is always in the right place like de jong. Kante doesn't have this skill. He is always somewhere close to the most dangerous places of the offence. He can steel every ball and what i rly like in this card is that he is same ruthless as he was in the real life. He will kill for you're club. There is only two minuses. 1st - agility. He feels heavy. Not like Nesta but something between. But it is not a big problem. He is one of the best cdm in the game because of the defending and strength. And second con is that sometimes ball just jump away from him in to the legs of the offensive player. Same problem have all good players at this position. I don't know why but the same thing was with kante and viera. I don't know why but it's true. So i recommend this card because he is one of the greatest CDM's players in the game and im sure that he can be in ur squad till the end of the game. And also he can helps u in offence. He has good passes and shooting. Not as Gullit but much batter than Kante.