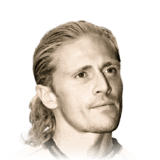 After a lot of trys to find the right CDM for my team, Petit has made very clear he is going to be in my start eleven for a long time. This guy is outstanding defensevely and phisically. Literally, no one can win a duel with him, especially when it seems to be a little 'glicht' in the game.

Pace: Used shadow to boost his pace. Nothing to complain here.

Shooting: He does the job in open chances with his left foot. Also his long shots are fine, but only the ones straights to the goal (didn't try finesses due to his low curve and positioning on the field).

Passing: Really good dinamic with Scream Firmino in a 4-2-3-1. He doesn't fell heavy to construct the play, altough it's difficult to turn him sometimes, so i dont recommend making passes in the situations he have to turn him. But don't get me wrong, he's a good passer.

Dribbling: As mentioned in the passing zone, sometimes it's difficult to turn him due his average 73 balance and 72 dribbling. I recommend to be objective when the ball is with him. Ball control and reactions are fine, so if u like the passing game, you wont have problems.

Defending: A giant blond Kante. Amazing. His radar to appear in the TV scream flying like he has no past tracking down opponents is the best i tried this FIFA. It's very easy to control him in defensive situations because he's very big and can intercept anything. It's hard to name similar players as he reallly outshined every other CDM i played. He has the same physical as Gullit/Pogba while having the defensive awarness of Allan/Kante.

Physical: Also amazing. When positioned side by side with an opponent, it's a certainly recovery. His agression makes him active in every ball, and with a very high composure he stays on his feet in every tackle situation.

Very different from other players, easy to identify on the pitch.

Positioning to defend, always at the right place.

No need to press the tackle button, he takes the ball himself.

Agility, balance and dribbling (depending on your play style, but no really important for CDM).

I got Petit in a Prime Icon pack.I'm using him like 700 matches.He is not the best but he is good.