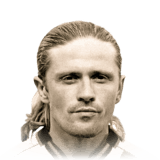 Today I want to review Emmanuel Petit 88 mid icon. Had this guy inin FIFA 19 and I just had to have him on my team this year as well.

Btw, I am a gold 1 elite 3 player just to clarify.

Defending - So, first of all, he is a monster. The Frenchman is a total beast and really controls the defensive part of the midfield in every aspect of the game. I play him in a 4-4-2 or a 4-2-3-1 and he fits in both formations. If you slap a Shadow on this man he has got 91 acceleration, 90 sprint speed and some INCREDIBLE defensive stats. There is nothing really to complain about so overall a solid 10/10 in defensive.

Passing - Petit is left-footed and it actually brings a new dimension to his game which other players has not got. Petit is not going to split up the defensive with a winner ball in behind the defence, what he does best is just passing the ball safely around without causing trouble and then he actually provides quite a few assists. 23 assists in 94 games for me so far. Pretty good to be fair for a CDM. So overall 8/10 in passing

Shooting - this guy really knows how to bang the ball but doesn't know how to put the ball in the net. Often when he is in a scoring position he will smash the ball at the woodwork and that's why he only scored one goal for me so far in 94 games. His job is not to score but his shooting is not his strong side 5/10.

Pace - all right so quite surprisingly even with a shadow he feels really fast and agile, and when combined with a lot of strength then you basically have the ideal CDM. Pace 7/10 (with a shadow card of course)

Dribbling - this guy is not Neymar. He can't turn on a plate but he doesn't feel clunky on the ball at all compared to many other CDM's. The most important thing for me is that I feel safe when having the ball and with Petit, I do feel safe. He is 3* wf and that allows him to do drag backs which is the main "skill move" when I dribble around the ball with him.

Physical - Petit is insanely strong. He pushes EVERY midfielder or attacker off the ball when I use the LT button (Xbox). He is a complete monster, of course, this is a 10/10.

Would I recommend buying him? YES. Definitely one of the most underrated icons in my opinion. He does the job and he is crazy in the defence. He is way cheaper than Vieira and does the same job. If you look for a new CDM, then Petit is the one you are looking for.

So I decided to do a mid icon pack for a chance to get some good players. Obviously I wasn't expecting R9 but I thought I'd still do it. When I opened the pack and saw French, Cdm. I was thinking it was Makéléle so I just skipped it. Then when i saw Petit I got very hyped. I put him in my team for Weekend League at CDM in a 4-2-3-1 along side Fut Birthday Bakayoko. I instantly noticed his High/High workrates as he was everywhere. He is quick (with shadow) and I instantly noticed his physical presence on the pitch. His passing is sick with the left foot and shooting/long shots aswell. I think his dribbling is good and the 87 strenght 92 aggression is insane. I think he is 100% worth it. The best cdm I've used this fifa!

Weakfoot when you do long passes

I think that Petit isn't the 950k worth, because if you're searching a good cdm you can buy sissoko for just 35k at the moment. But because i packed him untreadable i used him and he's great in defending and he wins nearly all his duels. he hasn't the best shooting and doesn't feel very fast and dribble isn't fantastic but he stays really long with the ball because he letterly uses his body to block everyone. but you can defend like the best and after sissoko it's the only cdm i tried and Petit is a little bit better.