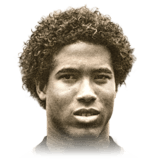 Read any list of the top 100 Liverpool players of all time and somewhere near the top will be none other than John Barnes. Definitely an excellent and deserved addition to this year’s set of ICONS.  Speaking of which I would love to read in the comments any “ICONs” you feel are currently missing from FIFA 20 … for me, I would love a David Beckham with 98 passing in my squad.  Back on track, this review was not one that I had planned at all … have you ever played a card that absolutely dominated you in a match and just had to try it?  Well, this was me last weekend when a FUT Manager unleashed the big man on me and scored a hat trick of top left curlers… I knew I had to give him a try.  While his goal-scoring ability did not match the massacre I faced that day, Barnes was still the powerhouse in the following squad this weekend: 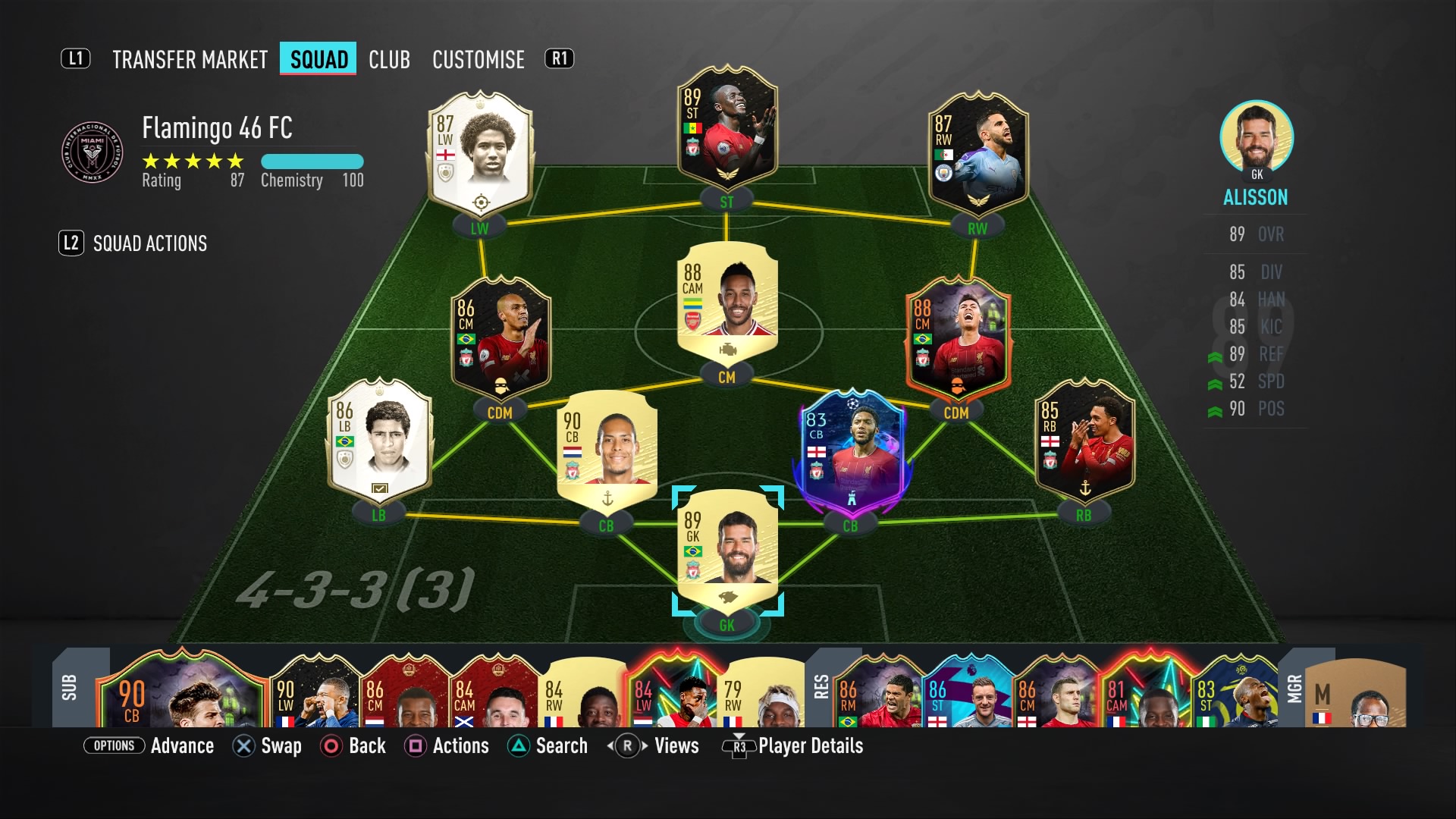 So as you can see, and my goal/assist returns will show, I did not have the same prowess with Barnes as my opponent a weekend ago.  However, there was still a lot to like about this card from his Weekend League debut in my squad.  After weighing the options I came to the conclusion that this card was never going to be quick or fast, and therefore went for the SNIPER chemistry style for 99 FINISHING, 93 AGILITY & the 81 BALANCE boost.  The result was a reliable finisher in front of goal and a relatively agile dribbler that mixed incredibly well with his strength.  Overall, Barnes was an extremely well-rounded card with the stand out stat his 84 STRENGTH; he is a brick house, an immovable object and he can serious impose himself upon most center backs (VVD the only one who was consistently successful at taking the ball, but what else is new there).  In the end, this was Barnes “strength”, but also his downfall as a card … If his strong point was pace, shooting, or dribbling he is an easy 9/10 card; but strength just doesn’t carry the same weight.

Not wasting a ton of words on the links offered to Barnes, any ICON is a guaranteed 4.5/5 and Barnes just misses out on a 5/5 due to his nation.  There are not a lot of regular cards from England that I, or any other FUT manager, would be looking to link and justifies the rating in my mind.

There is no doubt that the left foot curlers into the top bin are class, the 84 SHOT POWER is incredibly misleading given the way he unleashes the ball towards goal, his 4 STAR WEAK FOOT is not an exaggeration, and watching Barnes shrug aside Joe Gomez in my video and then score is amazingly satisfying (unless it happened to me).  All of these things are true and leaves this card a strong option, but he is just lacking that little something to push him into the 5/5 rating that I just suggested for Mahrez earlier this week.  90 pace, 90 shooting or even 90 dribbling as a starting point would make this card a serious weapon, but he falls just short… leaving me even more interested to revisit this card when the Prime ICONs drop on the 14th, that card looks incredibly scary to me after completing this review.

500k seems fair value to me given his statistics and the ability to link Barnes into any squad.  I went for the 4.5/5 here based on the striking resemblance between Barnes stats to RTTF Depay (300k).  Obviously Barnes does eclipse Depay in some key areas, but I am not sure it is a 200k gap, in fact, I am positive.
I feel that the good/bad rating on this card is probably the most important to this review.  I have mentioned some of the deficiencies, tried to do justice to the qualities, and maybe … just maybe sold this man short overall.  There is no denying this card has massive upside, and when you experience Barnes holding off your opponents CB, laying off a perfect pass to his teammates, followed by a goal, you can’t help but appreciate his qualities.  Just about all of the 9 assists from Barnes this weekend came from similar link up play and he is the perfect partner for any ST you might have, just not a stand-alone ST for me.

I am struggling to find the right words here.  If you are looking for a fun and different option from the status quo that you see week and week out, here is a perfect option.  Barnes opened my eyes to the fact that players slightly outside of the META can still provide admirable returns.  Perhaps it was my opponent’s lack of experience with players like Barnes that allowed him to thrive?  Regardless, I enjoyed my time with Barnes this Weekend League, and listening to World in Motion in the background didn’t hurt the experience. Cheers for reading. 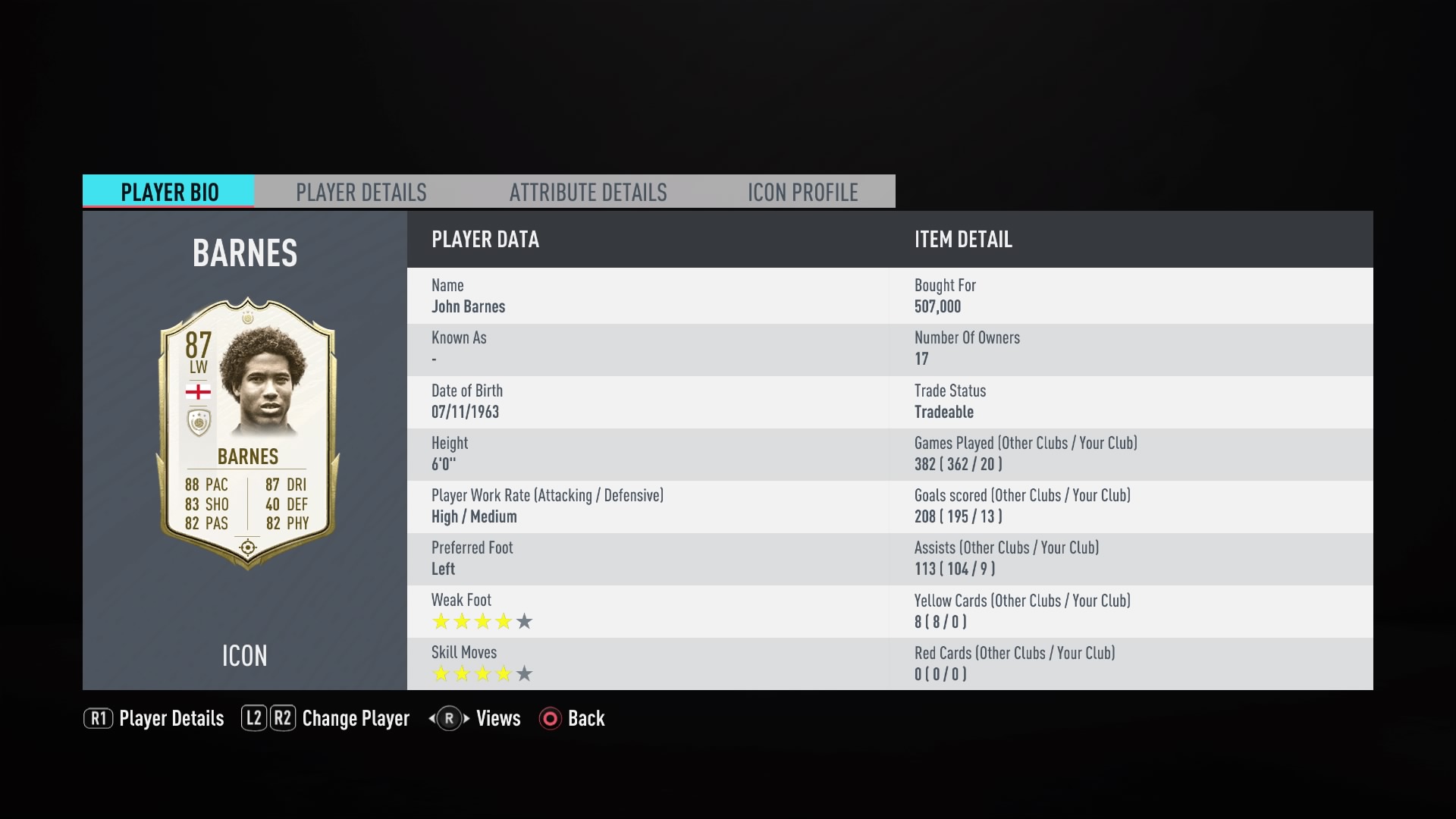 Being a big Liverpool fan I was excited to see Barnes added to the game this year and was even more happy with his game changing contribution to my forward line...

This guy fits the meta perfectly with his pace shooting and slick dribbling in game.. but what gives him that special "icon feel" are his physical attributes, At 6ft tall with a Hulk like body shape, if defenders do catch you up they just bounce off.

I paid 600k for this beast and honestly cant see him leaving my team before TOTY. If you're reading this because you're considering buying, do it... Up until this point I'd been using Eden Hazard and Barnes is another level entirely!

Shooting - 10/10 Finishes well from in and outside the box

Pace -9/10 Not quite mbappe, but use the right stick dribbling and you're not getting caught

John Barnes is an absolute monster on the field. This guy has the speed of Adama Traore, the shot of R9 Ronaldo and strength like Ruud Gullit. John Barnes pushes every right back off the ball and outruns Kyle Walker like he was Mertesacker. Put hunter on him and you will never lose a 1v1 situation again. His body shape is so strong as well. He is so quick and agile on the ball and his 4* 4* star weak foot and skills is really nice to use. At first, I thought he was right-footed so I played 20 games without knowing he was left-footed. But that wasn't even a problem he scored 14 goals in the first 20 games with his right foot. You may think "how expensive is he?", well he is currently 350K on Xbox. I mean you can get one of the best left-wingers in the game for such a low price. That is absolutely amazing and quite hilarious. If you have the money, go get him that's for sure.

Amazing pace - runs like he has fire in his ass.

He is bald in-game - not the afro on the picture

This guy feels like a cheat so early on in the game... First of all, I highly recommend you position change him to a ST in game. He definitely can play on the wing, but he'd be wasted there. Then I'd recommend using a sniper chem style. With a pace boosting chem style you can't increase his agility enough and it's noticeable, unless you play him on the wing and use an engine chem style. But once I put sniper on him he felt much smoother and became stupidly clinical. This guy puts away everything, his left foot reminds me of Bale's from last year. He's also fast and strong. So if he doesn't initially burn the defender with pace, there's a good chance you can just shrug them off. Especially with people focusing on faster but weaker CB's such as Militao this year. It's a shame he didn't get the 5* WF I feel he deserved, but so far I've had no problems finishing on his right. Oh, and you get the bonus of having great passing stats for a ST which I also feel is more relevant this year. It's nice to finally have a great English forward Icon and I can't wait to try his prime. I'd say the only thing I would want on this card is a bit more acceleration. Other than that he's a complete striker for me.

No stand out weaknesses as a ST