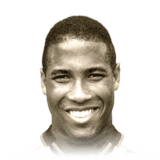 I'll start by saying I used Barnes in a lot of positions, but mainly as an LF, RM, Right ST, and RAM. All Games with a Sniper Chemistry Style.

When FIFA 20's new icons were announced, Barnes' Prime was the one I was most excited for. Pace, Dribbling, Shooting, Physicality. He had it all. I finally last week had enough coins to spare to risk buying and trying Barnes' Prime. I've used his 87 for a good while (~50 games?) and was hoping for an improvement on the mid icons' flaws.

The best comparison I can muster is that of Scream Hulk. However, I hated Hulk's inability to dribble and get into positions to use his rocket left peg. Barnes, however, is the exact opposite. His dribbling is silky smooth, even in poor gameplay conditions. Sure in poor gameplay he felt a tiny bit stiff in the latter half of the game, but so does Messi sometimes. His ability both on and off the ball is top tier, and i believe Barnes to be one of the best value for money cards in the game right now!

Pace wise, he felt as his card suggested. Fast enough to outpace midfielders and center backs, but full-backs such as Semedo and Walker had a habit of catching up. However, as you'll hear later, that's fine. Overall a solid 9/10.

Dribbling is top tier. Not much else to say. He is incredibly agile on the ball and is able to turn quickly to get open shots. 8.5/10, only because in poor gameplay he felt a bit stiff at times when fatigued.

Shooting is Class, outside the box, Inside the box. The man's left foot is lethal. Finesse shots don't always work with Barnes, but any power shot is guaranteed to reach the back of the net. Powerful strike and clinical as hell. 10/10.

Passing wise, he was solid, as an ST/LF you won't really test his passing ability. However, I played 10-20 matches in 442 (2) as a RM. His crossing was superb. Short passes were powerful and accurate. Long passes were surprisingly good, powerful and curved quite a bit (allowing for excellent switch play through balls). 8/10. not Pirlo tier, but suffice for an attacker.

Defending was occasional, but with his 86 strength was able to outpace attackers and get in a solid stand tackle. 6/10, nothing crazy...

Physicality is really the reason why people consider Barnes over Nedved and co. He's built like a brick shithouse. Strong as hell and really, even with poor balance, isn't ever shoved off the ball. TOTY Virgil Van Dijk even struggled to out strength Barnes. 10/10. the only thing ill add is 88 stamina does hinder the card if you play team press a lot. 80+ minutes of team pressing with Barnes definitely killed his ability dribbling wise.

Overall, i really recommend him for his price of ~600k+. he's a class attacker who really does make the game more fun, pace shooting and strength are a combination that's really powerful on a winger. If you're considering getting him from SWAPS 2, id say yes, if you have a good team around him. No matter how good your attackers are, if your midfielders are shite, then he's going to be less effective. Id always recommends a midfielder 1st over an attacker. If you have a good midfield then yes, 19 tokens is a steal.

So I was desperate for a good solid striker and I bought Barnes with low expectations, I could not have been any more wong. I played him as a striker with mid george best, bernardo silva, and adama traore behind him. He feels like R9 in disguise. My first 10 games with him were in WL, all rage quits before halftime.

Its the most broken card I have used all year.

When it comes to the pros of this card its quite simple, EVERYTHING is a pro. his shooting with either foot is perfect inside the box (feels like 5* weak foot).

His longshots with his left foot from the edge of the box are going in more often than not as well.

Barnes' passing is an extremely useful thing to have in a striker as well, and is pinpoint accurate.

His dribbling is surprisingly good and even with that 77 balance he felt really smooth on the ball, I hated Cristiano because of his low balance, but it doesn't affect barnes at all.

When it comes to the pace, even without boosting Barnesinho, he still ran past centre backs and fullbacks like they weren't even there.

Last but not least is his physicality, this is what makes him so deadly in the box. He can shield people off very easily, then you just to a fake shot on his left foot and you finesse it into the top corner.

Defending isn't an important stat on a striker in my opinion, however, I have to add that he did intercept a decent bit of balls which resulted in scoring opportunities and goals.